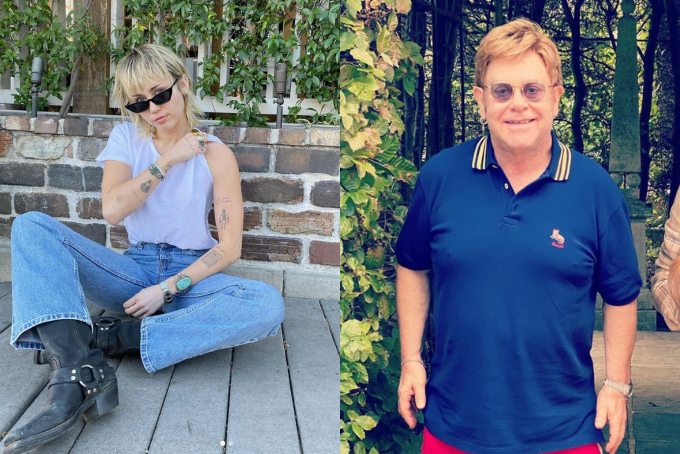 Miley Cyrus and Elton John are teaming up for a Metallica cover.

The “Midnight Sky” singer shared in an interview with the UK radio station, Capital FM, that she has an upcoming collaboration with a few big-name stars, including Elton John. Among the other collaborators featured is Chad Smith, the Red Hot Chilli Peppers drummer, and Yo-Yo Ma. The Metallica song they will cover is “Nothing Else Matters.”

Cyrus also has an entire album planned solely of Metallica covers. This track will be the first feature from said album. “I did a Metallica cover of ‘Nothing Else Matters’ featuring Elton John on piano. I’ve got Yo-Yo Ma, Chad Smith — so many all-stars in this band,” she revealed. “I’m so excited about this collaboration.”

The Plastic Hearts hitmaker addressed the potential confusion that her fans and Sir Elton John’s fans may have of the duo’s collaboration, “I mean, having Elton John and Metallica and me… I love when ingredients don’t quite fit,” she said. “Or it seems like a concoction that no one would ever put together, and you gotta have someone like [the song’s producer Andrew] Watt that will take that risk.”

Cyrus’s latest album, Plastic Hearts, became the No. 1 rock record in the country the week after its release on Dec. 12. Additionally, seven songs from the album charted on the Hot Rock & Alternative Songs chart. The album was Cyrus’s first entry on the Billboard Top Rock Albums chart (as it was her first rock-themed album of her career), which is why hitting No. 1 on the Rock Albums chart was a fantastic accomplishment. Overall, it was No. 2 on the Billboard Top 200 Albums chart, beaten only by Bad Bunny and his album, El Ultimo Tour del Mundo.

You can watch Miley’s full Capital FM interview below in which she discusses more of the Plastic Hearts album, including her chart-topping duet with Dua Lipa.