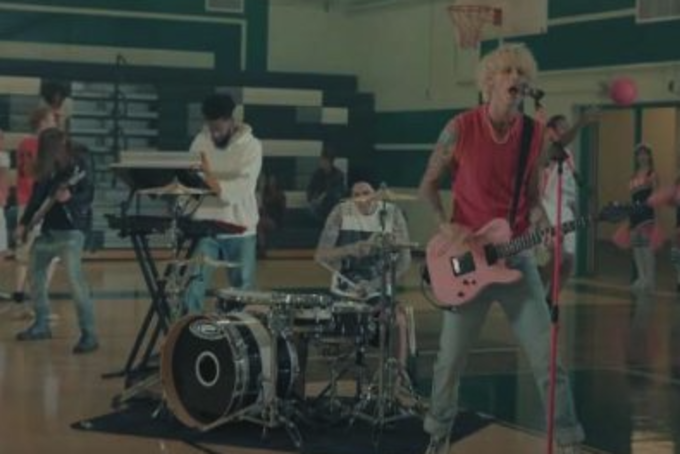 Machine Gun Kelly just dropped the second trailer for his upcoming feature film Downfalls High which gave fans a further glimpse of what other familiar faces appear in the star-studded cast. We learned from the first 15-second teaser that the upcoming film would star Sydney Sweeney, Chase Hudson, and Travis Barker.

Ahead of the films upcoming release on Friday, MGK dropped another high energy teaser revealing many more exciting cameos.The trailer opens up with Hudson and Sweeny’s characters laying on a football field talking about what they want to be when they grow up. With MGK’s “Title Track” playing in the background we’re met with a high energy montage of what we can expect from the upcoming musical. The cameos include Trippie Redd, Blackbear, and Iann Dior who all feature on MGK’s Tickets to My Downfall album. The film will also feature the acting debuts of Jaden Hossler and singer Maggie Lindemann who makes a quick cameo towards the end of the new 31-second trailer.

The Film which was co-written and directed by Machine Gun Kelly and MOD SUN will be released on Friday January 15th. The upcoming film is said to be a first of its kind musical experience and will feature songs and stories based on Machine Gun Kelly’s Latest album Tickets to My Downfall. If you think about it, its almost one big epic music video for the whole album! Machine Gun Kelly and his frequent collaborator Barker will act as the narrators for the story which MGK described in a statement as being a “pop-punk grease.” We are super excited to see what other surprises are in store and to rock out as we see this all star cast enroll at Downfalls High on Friday!