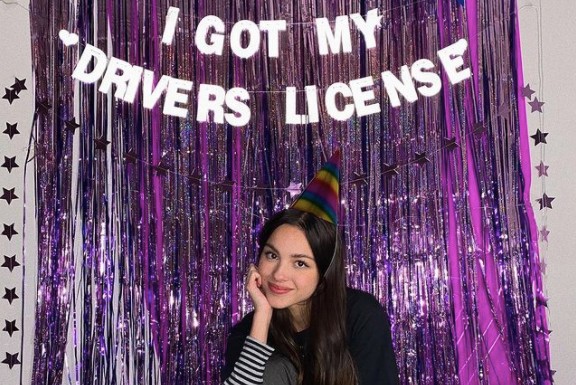 A new era of Disney stars has commenced, marked by the instant success of High School Musical: The Musical: The Series star Olivia Rodrigo’s debut single, “Drivers License.” For so long we’ve been without the era of Disney icons like Miley Cyrus, Demi Lovato, The Jonas Brothers, etc. The public reception of Rodrigo’s introduction as an artist indicates that a new generation of talent is taking form to fill this gap.

A little over a year since the hit Disney + series premiered, Rodrigo has released her first song not associated with the show. “Drivers license” is an instant phenomenon, due to Tik Tok, nostalgia, a little bit of drama, and most importantly Rodrigo’s impressive vocal and songwriting abilities. It’s the perfect Disney star formula, updated to fit 2021 and the new target audience: Gen Z. Although it’s clear that the demographic who enjoyed the original era of Disney stars have now grown up, Rodrigo’s debut is also resonating for them in a nostalgic way.

Unlike prior Disney actors turned musicians, Olivia seems to have more freedom in making her music. In “Drivers License,” she even drops the f-bomb, something that would’ve never happened under a Disney contract back in the day. Although she’s only seventeen, it doesn’t feel inappropriate and is definitely purposeful during the highly emotional bridge. It comes as no surprise that Olivia writes her own music and is taking control, as Taylor Swift is undoubtedly her biggest inspiration. Another parallel between her budding career and Swift’s is that Rodrigo is brave enough to be vulnerable about real life experiences, despite the whole world knowing exactly who she’s singing about.

What’s a true Disney star without a bit of drama? In “Drivers License” it’s clear that Olivia is singing about her HSMTMTS co-star, Joshua Bassett. There is plenty of proof that they were romantic during and/or following the shooting of the series (a simple Google search will tell you all of the details.) The lyrics in “drivers license” also clearly point to his new romantic interest, older Disney star Sabrina Carpenter from Girl Meets World. The love triangle adds context, but is surely not what makes the song so special.

The structure of “Drivers License” supports the emotional weight of Rodrigo’s words in such a powerful way. The buildup and release plays out perfectly, leaving you with teary eyes and goosebumps. One of the most effective elements of the track is the use of car sounds throughout. It opens with the constant beeping sound a car makes when passengers aren’t buckled in or the door is unlocked. This specific, visceral sound fades into the production and serves as the main tempo throughout the track, alongside a consistent piano note.

“Drivers License” is a classic breakup track told from an interesting perspective. Rodrigo sings about getting her license and being able to drive, something most teenagers can relate to. But, the expected excitement isn’t there because she can’t visit the one person she wants to see. Using this specific detail to drive the whole song provides the perfect coming of age sensation. There are many aspects that make this the perfect debut single; it provides specific details that also resonate with a broad audience, it puts Olivia’s gorgeous vocal ability on display, and it has a bridge that will leave you speechless. The song builds and builds until the end of the second chorus, where there’s a brief pause followed by a complete change in pace, sound, and emotion. The use of vocal layering, synths, and descriptive imagery easily make the bridge the most memorable moment in the track. It’s so pleasing to the ear and addicting to scream at the top of your lungs that it stays with you after listening.

Fans have compared the bridge sonically to Lorde and lyrically to Taylor Swift. It’s definitely worth noting that comparisons can be hurtful for some artists trying to make a name for themselves, but Olivia has never been ashamed of being a super fan and embraces these comparisons with open arms. Although it’s clearly authentic, from a marketing perspective it’s also genius, as Olivia has already formed her own fanbase containing a cross-over of fans from Swift, Lorde, and other inspirations. Swift even commented on Rodrigo’s Instagram post, quoting her own mother saying “I say that’s my baby and I’m really proud.” If you need any further proof that Rodrigo is being ushered in as a new era of pop royalty, look no further.

With the release and adoration of “drivers license,” there’s also been an interesting consensus. Since so many of Olivia’s fans are also Swifties, they’re aware of the scrutiny Swift endured at Olivia’s age because of her vulnerability in her songwriting. This same kind of protection occurred when Billie Eilish started garnering massive amounts of attention. It’s fascinating and hopeful to see a defense forming for young stars, particularly female, in order to not repeat the damaging bullying, double-standards, and sexism seasoned pop stars have faced throughout their career.

Overall, “Drivers License” is a triumphant debut, impacting culture immediately in a way that doesn’t happen often. Not only is it resonating with teens on Tik Tok, it’s taking the Billboard charts by storm and receiving critical acclaim. If it debuts at number one, which is well within the realm of possibility, Olivia Rodrigo will make history. Watching this all play out makes it clear that we’re witnessing a passing of the torch moment in the music industry. If she can reach such a huge audience and impress so many different listeners with just one song, there’s no telling where her career will go.

One thought on “Olivia Rodrigo’s Debut Single, “Drivers License” Has Taken the World by Storm”