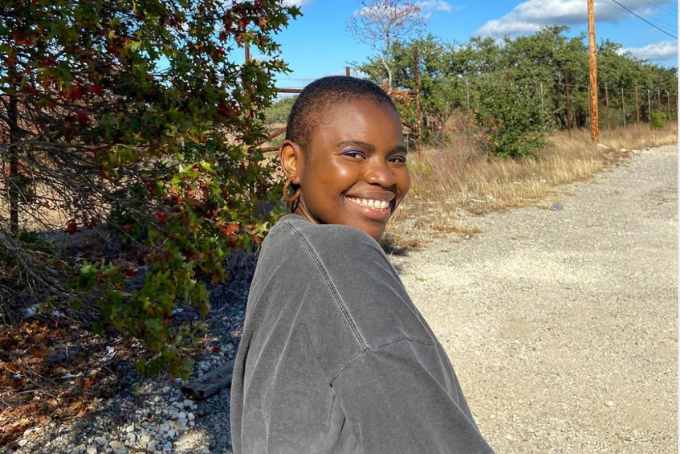 Laetitia Tamko, better known in the music world as Vagabon, does a lot of things well. She sings like an angel, she writes and produces most of her own music, and she powerfully plays a slew of instruments. Vagabon also knows how to pick a damn good collaborator. In her cover of Rod Stewart’s “Reason to Believe,” the Cameroonian-American artist pairs up with Australian indie darling Courtney Barnett for one of 2021’s best songs so far.

The music video for Vagabon’s “Reason to Believe” takes us on a nostalgia-inducing road trip through the deserted desert. The whole thing looks as if it was captured by a 1990’s handheld camcorder — which might very well be her recording device of choice — and the end result is harsh yet magnificent. Where Rod Stewart serves up outdoor-wedding-in-the-middle-of-the-country vibes in “Reason to Believe,” Vagabon’s take on the tune is destined to be the leading song on every lovelorn music fan’s mixtape. She sheds the hit song of its poppy roots and transforms it into something new, something that feels absolutely perfect as the soundtrack of the exciting journey she takes in her music video.

Vagabon’s song takes us on somewhat of a spiritual journey, too — a feat that’s actually accomplished in both of its versions. Lyrically, “Reason to Believe” introduces us to someone who’s got the ability to “lie straight-faced” to the hero of the tune. The line preceding this sentiment sticks out much more on Vagabon’s track, despite its lyrics being identical to Stewart’s. “I’d find a way to leave the past behind, knowing that you lied straight-faced while I cried,” is the full line, one that she delivers in her nothing-short-of-heavenly voice.

Stewart’s version is great in its own way, chiefly as a song that’s pretty repetitive but pretty perfect for singing with your friends or performing during karaoke night. Vagabon’s take, on the other hand, is a profound exhibition of the pain that resurfaces when one begins to reminisce about trauma they endured during their youth. Her version is honestly so good, the fact that it’s a cover might shock listeners. Vagabon’s “Reason to Believe” deserves a place alongside “Torn” by Natalie Imbruglia, “Nothing Compares to U” by Sinead O’Connor and the other truly fantastic indie covers released over the years.

The song’s already a winning recipe, and then comes its cherry on top: Barnett’s vocal harmonies. They’re subtle, so much so that you might not even pick up on the fact that it’s her singing if her name wasn’t credited. Despite playing second fiddle — not literally — on this track, Barnett’s addition is perfect. The two talented musicians are amazing on their own, so it’s really no surprise that they’re so good together. As Vagabon and Barnett harmonize during the chorus of “Reason to Believe,” its effect is absolutely serene. Because the song’s lyrics are so emotionally charged, it’s genius the way Vagabon balances them with simple singing and guitar. If you believe a song is capable of creating ambience, then “Reason to Believe” by Vagabon and Courtney Barnett produces an atmosphere that’s tranquil and troubled in the best kind of way.

But don’t just take our word for it — head over to YouTube to give Rod Stewart’s original as well as Vagabon’s version a listen. You’ll thank us later.