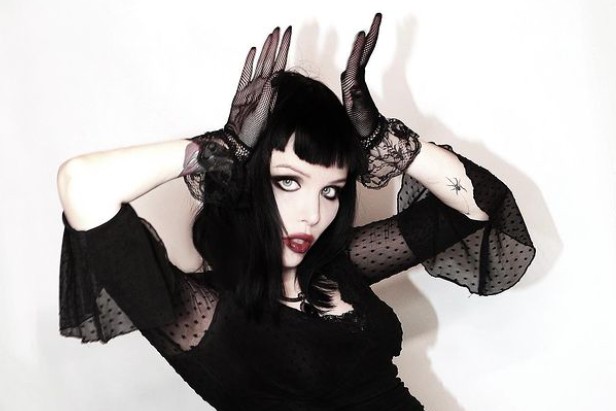 2021 is off to a great start as electro-industrial legend Alice Glass announces her upcoming album alongside the release of her single “Suffer and Swallow.” After leaving Crystal Castles and bravely exposing bandmate Ethan Kath as her abuser, she has only released an EP and a couple of singles, leaving her fans screaming for more. Glass recently announced that her debut LP is coming, and “Suffer and Swallow” is the first single from it. After hearing this song, we can’t wait for more.

“Suffer and Swallow” strikes the perfect balance between the harsh and sugary sides of Alice Glass, as she puts on a sickly sweet affectation one second and starts screeching the next. It feels fractured and stark, and probably the point. When you listen to the lyrics the first time, it may seem like the meaning of the song is mostly unattainable, and maybe it is. However, about 100 listens deep, we can at least take a stab at it.

So let’s start with the most obvious layers, shall we?

It’s pretty fair to assume that this song is an outlet for Glass to process her trauma and feelings toward her former Crystal Castles bandmate. It seems that acting out sadistic revenge in song is her way of taking her power back, and that her cutesy style in certain parts of the song is a facade that vanishes when she releases her inner demon.

Diving a deeper, it’s likely that this is Glass’ way of biting back at those who didn’t take her seriously, as a person or as a survivor. The lyric “Everyone said I won’t” really exemplified this. Everyone said she wasn’t capable of standing up for herself, so she exacts gruesome revenge on her abuser to prove them wrong. This is how Glass shows her listener that she’s not going to take it anymore — and that if she can’t earn your respect, she’ll settle for your fear.

But most of the time it seems she’s talking to directly to her abuser. She seems to even be mocking him with the lyric “I did this for you.”Oftentimes abusers say things like this to the people they hurt in order to gaslight them. Glass could be flipping something he used to say and turning the meaning on its head. It seems that everything he did “for her” she intends to pay back in full. Another lyric, “There is no tomorrow,” seems to imply that Glass feels her abuser stole her future, so she intends to steal his too.

Aside from her abuser and her detractors, here’s a third person Glass seems to be talking to in this song – herself. At first, her main refrain (and the title of the song) seems to be demanding that her abuser suffers through the same pain she felt, but really, she’s also reminding herself to compartmentalize her own suffering so she can survive, too.

In addition to the single, Glass also released a music video with imagery that switches between scenes of her sleeping and her dreaming of gruesome imagery, which begs the question: is this this a vengeance fantasy, or just another nightmare?