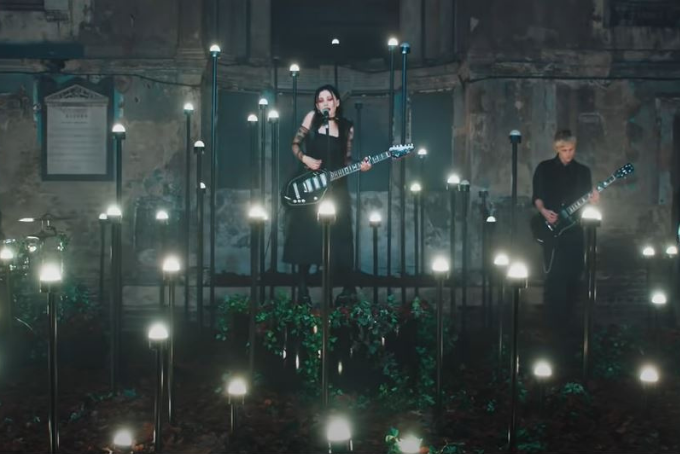 “Loving you is easy.” It’s a line that’s repeated again and again by Pale Waves’ singer Heather Baron-Gracie on the band’s latest single, “Easy.” It’s also a sentiment that perfectly sums up the song because, without a doubt, it’s easy to love this synth-pop love anthem. Full disclosure: It might not be a masterpiece for the ages, but this track’s sure to put the British band on everyone’s radar as well as a smile on your face.

It comes as no surprise that this four-piece group shares a label with indie darlings The 1975, given that both bands have very similar sounds. We’d argue, though, that Pale Waves is a lot more pop-punk than they get categorized as. Hell, even their music video for “Easy” looks like a not-so-subtle cinematic nod to My Chemical Romance’s “Helena.” They’re basically a dash of Paramore, a spoonful of Fall Out Boy and a large cup of The Naked and Famous. The end result: a band that’s not super original but, nevertheless, produces music that’s really fun to listen to.

The similarities don’t stop there, though. Baron-Gracie’s singing style runs the risk of sounding inauthentic and, honestly, like an impression of The Cranberries’ powerhouse frontwoman Dolores O’Riordan — albeit minus her adorable Irish accent that seeped through in each and every song. Even Pale Waves’ lyrics feel familiar, so much so that you’ll likely find yourself finishing the singer’s sentences as “Easy” forges on. “The world can be so sour, but you make it so sweet,” she sings in its chorus, a sentiment that’s pretty beautiful but also pretty cliché.

However, the fact that they’re not the most original band out there isn’t reason enough to railroad Pale Waves. For starters, its members are all in their early 20s, so they’ve still got plenty of time to elevate their sound. Additionally, their “Easy” video serves as a firm reminder of this inevitable fact of life: there are no original ideas. It’s why we see reboot after reboot of shows, cover after cover of songs — the list goes on and on. What makes Pale Waves an impressive band is that they’re able to take stock of what’s come before them, music by artists who’ve most definitely inspired them and influenced their sound, and still crank out tunes that feel new and fun. They’re not carbon copies, they’re a natural evolution of music.

That’s why “Easy” by Pale Waves is worth your time. Yes, it feels like a song you’d hear at the prom or in the trailer for a coming-of-age film, but that’s actually what makes it so good. It’s someone singing their heart out about how love can conquer all. As a listener, it transports you to a warm, safe space where it’s OK to revel in the magic of love and lose yourself to its wonder. It’s a familiar song that somehow gets better with each listen. You might not remember the band responsible for it or even its title, but “Easy” by Pale Waves should definitely be on your playlist.

Watch Pale Waves’ music video for “Easy” above and check out the rest of their exciting music at their official YouTube page.