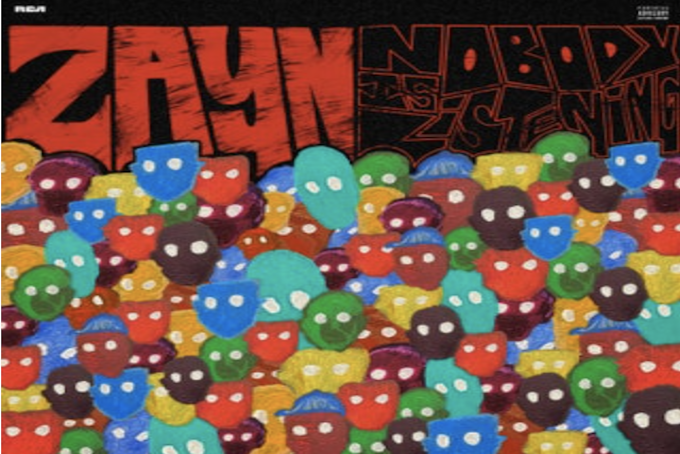 Zayn Malik has always presented himself as the quietest member of One Direction. When it comes to his individual career as an artist, he does the same. After a three year break from releasing a complete album, he’s finally released something new with Nobody Is Listening, right on his 28th birthday. From songs that you can sit alone with your thoughts with, to songs which can be played at a bonfire, this album has it all.

Nobody Is Listening opens up with “Calamity,” the only song Malik has ever rapped in. From the title, it can be assumed that he does not feel in control of his life. While this song attempts to bring a new aspect of his creativity and versatility as an artist, this attempt falls short, as his rapping quickly devolves into mumbling.

The two best songs of the album are “Windowsill” and “Tightrope.” “Windowsill” has taken the reigns of being one of the dirtiest songs Malik has written. This may be a turnoff for some, but the song is produced in such a catchy way it’s hard to skip it.

“Tightrope” has turned into one of best love songs in his entire career. By combining his own South Asian culture in the post-chorus Malik melodiously sings in Urdu “Chaudhvin ka chaand ho ya aafataab ho? // Jo ahi ho tum Khuda ki quasar lajawaab ho,” which when translated means “Are you the full moon or the sun? // Whatever you are, I swear to God, you are beyond comparison.”

At the end of the 11 track album, Malik unfortunately only has a couple songs that stand out. While he aims to project a “cool and aloof” image, he falls short in many aspects. Nobody Is Listening is something you can enjoy every once in a while, and has some songs that can be looped all day, but as an entire album don’t expect it to make it to any “Best of 2021” lists anytime soon.