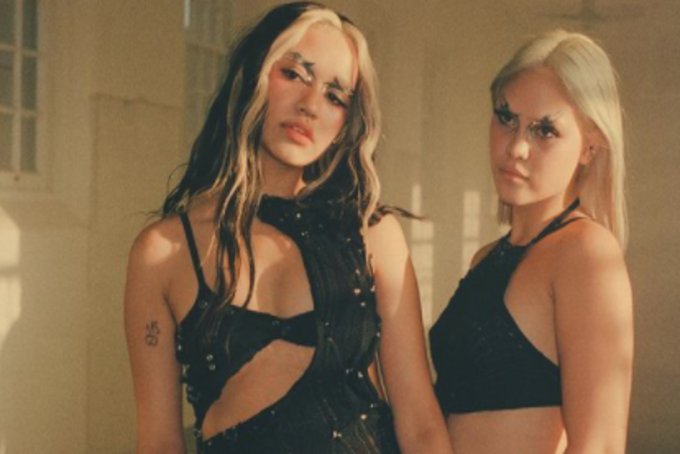 Australian girl power duo, Cat & Calmell, have released their first single of the new year “Dramatic.” To compliment the track, the girls also released a powerful music video with stunning visuals. This release serves as an appropriate introduction to their sound and overall artistry.

Cat, who is 20, and Calmell, who is 22, have a long history of collaborating as a duo. Cat spent her childhood in China and moved to Sydney as a young teenager, while Calmell was born and raised in Western Sydney. The combination of their personalities shines in their music, reflecting their individual upbringings and their vast influences.

“Dramatic” starts with a haunting vocal and inviting guitar strum that is quickly cut short by a sharp Billie Eilish-esque beat. The lyrics are desperate and brooding, with an intriguing edge. When the chorus comes in the beat picks up and the theme of the song becomes clear. It’s a track about being silenced and feeling powerless.

In the chorus they sing, “Shouldn’t bite the hand that feeds me // But you’re not the man.” This is a great lyric about the double-edged sword of defying those who are complacent but not wanting to upset them, since they hold the power. During an interview with ABC, the girls spoke of the lyrical content saying, “We wrote this song as a way to express our frustration at the people in power and their complacency with the state of the world. It’s a cry of frustration from our generation to theirs.” This message is extremely relevant, succinctly summing up the zeitgeist of the Gen Z experience and attitude.

The music video for “Dramatic” is, to be very frank, dramatic in the best way. The acting component is done well and the video is the perfect visual aid to the track. The video takes place in some sort of mental hospital, with Cat & Calmell being admitted and acting out of defiance. After hearing the song and analyzing the lyrical content, the video is a great metaphor for the message the girls are aiming to send out. The visuals are edgy, artists, and pleasing to the eye. The mix of bright colors and dark themes definitely sums up the energy the duo brings.

If “dramatic” is the listener’s introduction to Cat & Calmell, it definitely gives a taste of their personalities, vocal ability, and overall vibe. The song is dark, but with a pop spirit. Their vocals are on great display, showcasing their intriguing tone and inflection. Their voices are very similar and at moments it sounds like one artist is performing, which only aids their dynamic duo persona. Cat & Calmell are speaking for a generation and giving us bops at the same time. We can’t wait to see what’s next for the Australian duo!