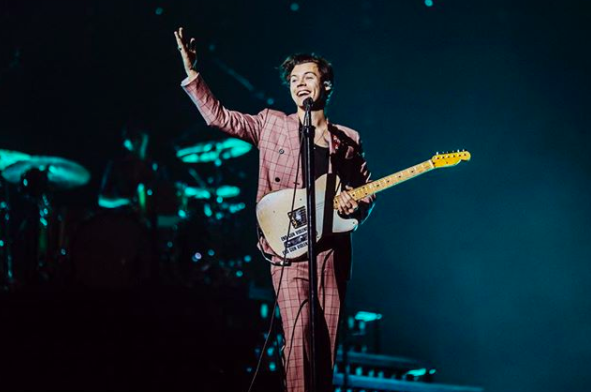 By: Ryan O’Connell and Amanda Larrison

Today is Harry Styles’ birthday, and despite having to postpone his tour, the singer’s actually had a pretty great year career-wise. His sophomore record, Fine Line was one of 2020’s top-selling records, he secured his first U.S. No. 1 with “Watermelon Sugar,” and topped off 2020 with his first-ever Grammy nominations. However, it’s not only his original music that showcases how talented he is. To celebrate his 27th birthday, we are honoring Harry’s best covers ever (not including his Vogue cover, of course).

Harry performed “wild Thoughts” when he was at the BBC Radio 1 Live Lounge back in January.  While this was a pretty unexpected song choice for Harry, what he did with it was pretty amazing, but let’s be real, are we really even surprised? check it out:

It was very shocking to me when I heard Harry was covering “Ultralight Beam, but he managed to truly make it his own and it was absolutely beautiful. Harry’s stripped down version of the song really brings out all of the emotion in the lyrics, making it more powerful than the original.

3. “Just A Little Bit of Your Heart” by Ariana Grande

You may or may not know this, but Harry actually wrote “Just A Little Bit of Your Heart” specifically for Ariana! If you’ve heard it before, you know how powerful and beautiful it is, so hearing Harry perform it live was really something special. Even more special is the fact that Harry performed it in Manchester, England, where the tragic bombing happened last year at the same arena during one of Ariana’s concerts. Harry’s rendition of the song is really touching and you can see his beautiful performance here:

While all of Harry’s wonderful covers show his immense range, it’s Little Big Town‘s Grammy-nominated country ballad “Girl Crush” that truly captures his incredible voice. The track’s muted, emotive, and atmospheric qualities only heighten Harry’s performance and overall talent. The cover is gorgeous, leaving us with a crush of our very own.

Harry Styles made his cover of this song by Fleetwood Mac more iconic than it already was during his live shows. He brings a lot of energy and power to this song when he sings it, making it one of our favorite covers he’s ever done. Not only are his vocals perfect for this song, but there’s some extra passion when her performs it, knowing that he’s actually been joined by Stevie Nicks on stage. He’s gotta make her proud!

While some might assume that a former boy bander would select a song a little more, well, predictable, Harry instead chose to offer his take on Lizzo’s massive funk-pop hit “Juice.” The track offered a new look at Harry as a pop star, capturing the same incredible electricity of the original. And, just when you thought it couldn’t get any better, the duo performed it together.

7. “You’re Still The One (with Kacey Musgraves)” by Shania Twain

It’s hard to keep from smiling while watching this stunning laid-back cover of Shania Twain’s ‘You’re Still The One.’ Converting this country-crossover hit into a crooning duet at a Madison Square Garden tour stop, Harry made the song his own, blending his strong voice perfectly with the soft twang of Kacey Musgraves’.

Never one to shy away from a challenge, Harry took on one of the biggest ’80s hits with vigor. Invoking all the soul and joy of the original, Harry’s version of the popular track oozes with fun, soul, and sex appeal. Is anyone else swooning?

9. “Torn (with One Direction)” by Natalie Imbruglia

While Harry has done some amazing covers since launching his solo career in 2017, his cover of Natalia Imbruglia’s “Torn” alongside his One Direction bandmates has stood the test of time. Dropping by the BBC Live Lounge on the promo tour for their final album Made in the A.M., the then-foursome showed just how far they’ve come by covering the song they first performed together as a group for Simon Cowell.

Though maybe not the easiest to impress, it’s hard to imagine that even the great Joni Mitchell could find a problem with Harry’s sunny take on her track ‘Big Yellow Taxi.’ Harry’s version is full of fun and joy, complete with playful delivery and even a giggle at the very end.