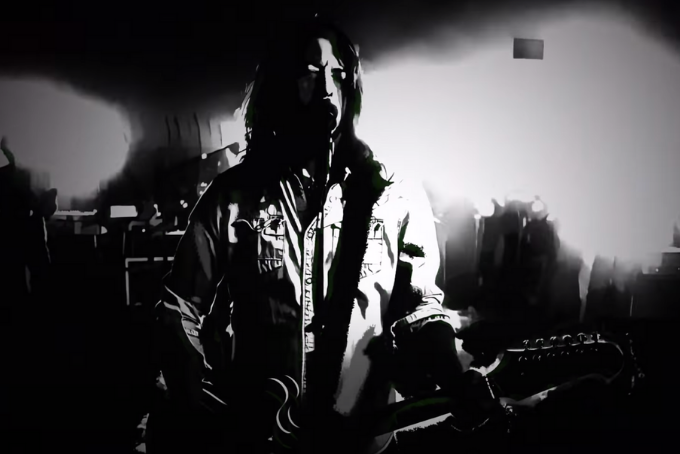 This past year, the live entertainment industry was halted, and fans are craving concerts like never before. Until we can safely return, the Foo Fighters are holding us over with their newest release.

On Saturday, the band shared the music video for “No Son of Mine,” one of nine tracks from their 10th studio album Medicine at Midnight. The video, however, uses audio from a live performance rather than the studio recording. Director Danny Clinch incorporates comic book-inspired visuals, animated by Bomper Studio, to create an interesting and eye-catching experience. We see a more experimental side of the Foo Fighters while they step away from their traditional style.

The video begins with an animated Dave Grohl playing the first few notes on his guitar. The only colors throughout the video are bright green, black and white which is a popular color scheme in dance music. Well, apparently that genre has actually influenced the album. In an interview with Ok! Magazine, Grohl explained, “I realized we’ve done the acoustic thing and the noisy thing, but we’ve never really made the party record. I thought, OK, well, instead of just retiring into the sunset with a nice sleepy acoustic album, I was like, ‘F*ck that! Let’s make something people will really bounce around to.'”

Throughout the music video, a man is featured succumbing to his many vices, including alcohol, drugs and gambling. He is spiraling out of control, eventually crashes his car and ends up at a church to confess his sins (while still clinging to a bottle). Grohl sings in the chorus about an “age of lost innocence,” and it’s clear that this troubled soul has lost himself. The video showcases a cautionary tale, but when blended with this powerful live recording, it’s definitely worth watching.

For the best listening experience, pop on some headphones, sit back, and watch the full video below.