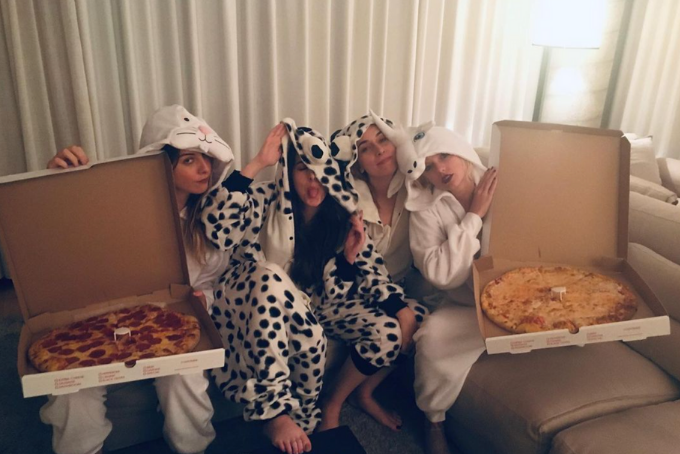 Since the remix of “Gasoline” has finally been released, Taylor Swift keeps joking that she’s basically the fourth sister of Haim.

The indie-pop sister trio dropped the new version of the song from the extended version of their record Women in Music Pt. III last Friday, February 19. In the remix, Swift is heard taking over the second verse, giving a punch of sass while also providing back-up harmonies throughout the chorus. This caused the “Willow” singer to teasingly tweet, “Cancel the DNA test, I’m the 4th Haim sister and this song is the only proof I need #GasolineRemix.”

For fans of both artists, this is the second time Haim and Swift have collaborated in the studio. Haim is actually featured in Swift’s latest release, Evermore, on the twangy, narrative-driven, crime mystery track “No Body, No Crime.”

It was almost written in the cards for Este, Danielle and Alana to team up with Swift as they wrote in a tweet, “Since we released wimpiii in June, Taylor has always told us that ‘Gasoline’ was her favorite. So when we were thinking of ways to reimagine some of the tracks from the record, we immediately thought of her. She brought such amazing ideas and new imagery to the song and truly gave it a new life. Thank you @taylorswift for adding your incredible voice and spirit to a track that means so much to us.”

Other artists flocked to the song upon its release with Lil Naz exclaiming, “Yes! Yes!” and Hayley Kiyoko stating she was “truly overwhelmed” by the collaboration. The extended version of Haim’s latest record doesn’t just feature Swift, though. It also has an appearance from Thundercat on the remix of “3 AM.”

Check out the remix of “Gasoline” from Haim featuring Taylor Swift yourself and see how it stands against the original!