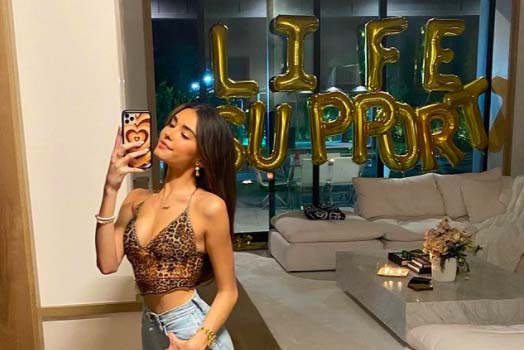 Madison Beer‘s debut album Life Support has been in the works for quite some time now and it’s finally here. The album dropped on February 26 but has been in the works since the release of her 2018 EP, As She Pleases. Madison has been involved in music ever since she was 13 years old and discovered by Justin Bieber on YouTube. Now at age 21, it’s clear that she’s grown a lot as an artist since her first single “Melodies,” which was released in 2013. Coming three years after her last project, Life Support gives listeners a vulnerable look inside Beer’s mind.

The album features 17 tracks including the previously released singles “Good In Goodbye,” “Selfish,” “Stained Glass” and “Baby.” Many of these songs on the album relate to Madison’s struggles with relationships and mental health. She opens up about her struggles dealing with a mental illness in “Effortlessly” reminiscing on how things in her daily life that used to feel effortless now feel more difficult. Another notable track is “Homesick” where she describes feeling like an alien who doesn’t belong on this planet. The song even features a quirky unexpected outro from Rick and Morty.

“Emotional Bruises” reveals where the song’s album title comes from with lyrics, “I can’t do this no more, cutting off the life support.” The song details how emotionally draining it can be being with someone toxic. The album wraps up with “Channel Surfing/The End” a staticky track alluding to a few of the songs on the album. The album outro also gives a nod to her song “Dear Society” which was previously released and is not featured on the album. The last track acts as a thank you note to those who listened with the last thing you hear is Beer saying “Thank you so much.”

Overall, the album follows Beer on an emotional journey highlighting many of the things she’s struggled with over the years. It’s clear with this album that she wanted to reach people who also may be struggling with similar things and create a piece of work that other young people can relate to. The pop album includes many nods to r&b with many soft emotional ballads. You can check out and listen to Madison Beer’s vulnerable debut album Life Support on all streaming platforms now.