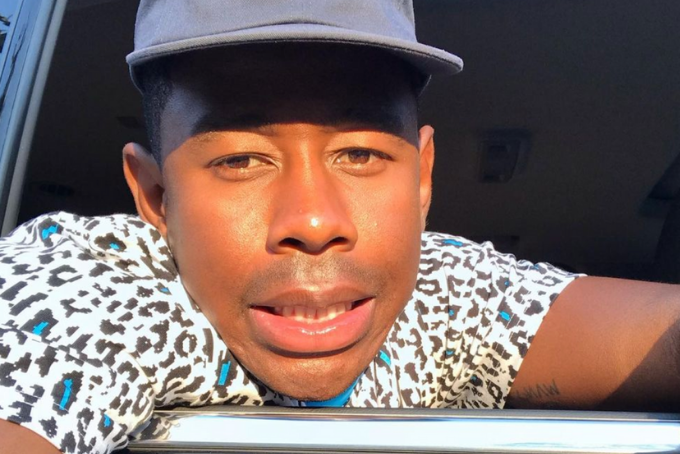 We’ve fallen in love and we know it’s for real with Tyler, The Creator. The charismatic and high-energy rapper we know and love celebrates a birthday today, so we took a look at his humble beginnings and artist-library.

Tyler Okonma was born in Ladera Heights, CA. He first tapped into his creative vision by taking the covers of albums in his house and mixing and re-designing covers for his imaginary albums. This niche for design prompted his first exposure to music, where at age 14, he taught himself piano, and later began writing raps and rhymes. Tyler co-founded Odd Future, an alternative hip-hop collective, in 2007, with Hodgy Beats, Left-Brain and Casey Veggies. Their self-titled mixtape in 2008 put them on the music-map, later signing with Red Distribution/Song in 2011.

In 2011, we got a taste of Tyler as a solo-act. The reveal of Goblin was a strong introduction. Tracks such as “Yonkers,” “Sandwitches” and “She” (with Frank Ocean) were powerhouses for the debut album. His husky ambition and flow creates dominance and courage, and paints him in his own category as a rapper.

In the following years, he would release Wolf and Cherry Bomb. Wolf was produced solely by Tyler expect for the final track “Lone” and featured frequent collaborators like Frank Ocean, Earl Sweatshirt, Pharrell, Casey Veggies and Erykah Badu. Along with the lead single “Domo23,” music videos were filmed for “Bimmer,” “IFHY” and “Jamba.”

Cherry Bomb in 2015 was released through Odd Future Records, with physical copies of the album featuring five different album covers. This album is the start of more jazzy and soulful approach in his music, versus the early material, which is more gritty and dark. In the jam “PILOT,” he claims, “Because I live first-class but I feel like coach,” referencing his promise to his humble beginnings and background despite his current rise to fame. New collaboration featured Kanye West, Lil Wayne and Schoolboy Q.

Flower Boy was an authentic account of Tyler, who portrayed a more personal side in the tracks “Foreword” (feat. Rex Orange County), “Garden Shed” (feat. Estelle), “I Ain’t Got Time!” and “November.” Hints of identity and sexuality can be decoded in the lyrics, allowing him to be honest with fans and have them relate. His message to fans in “Where The Flower Blooms” is about growth and worth: “I rock // I roll // I bloom // I glow,” encouraging fans that we can’t forget where we started and how far we’ve come, as artists, as people, as humans, and as trailblazers for change.

In 2019, the arrival of IGOR had the same impact as a head-rush post rollercoaster. The beats were wild and the lyrics were erratic, yet we couldn’t have been more excited. The album debuted at number one on US Billboard 200, becoming Tyler’s fist No. 1 album in the U.S. Songs like “EARFQUAKE” shook us to our core, while “I THINK” and “GONE, GONE / THANK YOU” made our hips sway and shake. IGOR won the Grammy that following year for Best Rap Album.

We haven’t seen the last of Tyler, that’s for sure, and we can’t wait for more to come. His roots trace back to alternative hip-hop, yet he continues to masterfully blend genres like jazz and r&b.