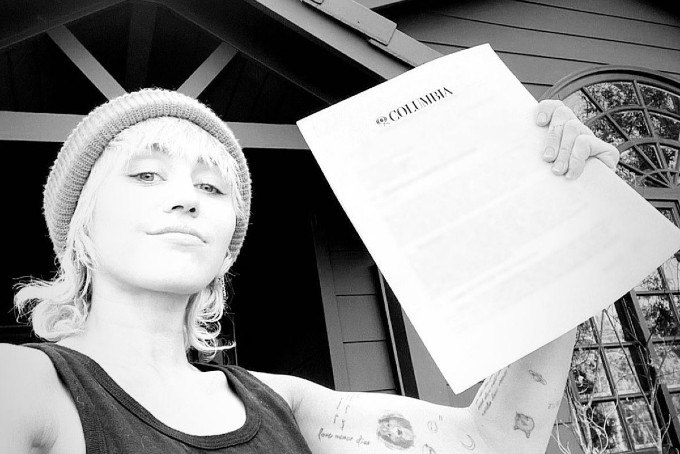 The “Midnight Sky” crooner announced the exciting news on her social media pages late last week that she had made the switch from RCA Records to Columbia Records. She had been with RCA Records for eight years, since 2013. The first album she released with them was Bangerz, which was a smash hit. Unfortunately, her last three albums under their label have not fared as well.

Fans were quick to notice that with the release of Cyrus’s last album, Plastic Hearts, physical copies of the album were nowhere to be found in stores. The album released on November 27, which was Black Friday, and retailers do not stock physical album copies on that date. Unfortunately, Cyrus revealed that she was not made aware of that fact ahead of time when she chose that release date.

Miley Cyrus and Her Dead Petz, the followup to Bangerz, was originally released independently from RCA Records on Smiley Miley, Inc. and made available for free, but was later released commercially under RCA Records and brought to streaming services. The album did not do well commercially and is considered one of Cyrus’ most controversial albums to date. Critics and fans alike had mixed reactions to it, which may have been why Younger Now, Cyrus’s follow-up album, was such a drastic stylistic change.

Unfortunately, Younger Now also did not perform well commercially. Despite the successful lead single, “Malibu,” Younger Now debuted at No. 5 on the Billboard 200 with 45,000 copies sold, of which 33,000 were pure sales.

Whether or not RCA Records is to blame for the “Prisoner” singer’s last three album “flops” is up for debate, but a record label is supposed to promote an album and push for radio airplay for its singles. Perhaps Cyrus became frustrated with RCA and left to Columbia Records for greener pastures (Columbia — like RCA — is a division of Sony Media Entertainment).

WHEN IM NOT RUNNING GAME. IM RUNNING MY MF BUSINESS.

Ron Perry, the CEO and chairman of Columbia Records, signed Cyrus. Other notable artists on the label include Beyonce, Harry Styles, Johnny Cash and so many more.