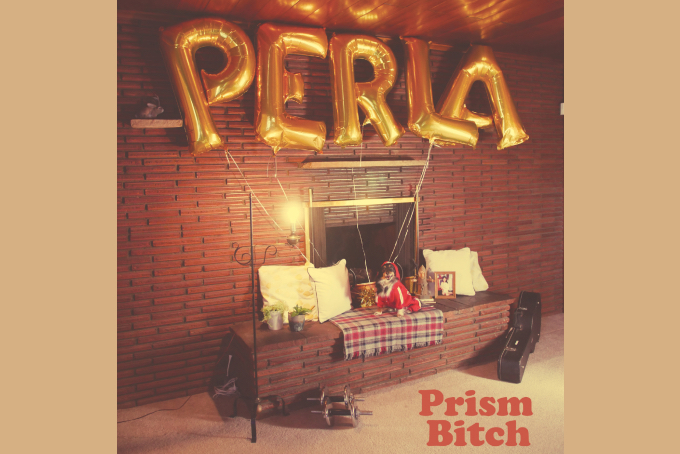 Explosive rock quartet Prism B!tch released their debut album Perla on March 5, 2021. The independent, 11-track album is jam packed to say the least. Filled with wild sound, soaring vocals and unapologetic, in-your-face “mom rock” — it marks the band’s debut aggressively— in the sense that like it’s members, it’s not afraid to have fun and not a single thrill is spared.

The sonic journey comes together in a perfect amalgamation of it’s members respective tastes and own musical strengths — Lauren Poole on bass and vocals, Lilah Rose on keys, guitar and vocals, Teresa Cruces on drums and vocals and Chris Walsh — the only male member — on guitar.

Soundigest sat down with the band to talk about their creative process leading up to the album, their take on “mom rock” and their philosophy behind their band name.

The album seems to be a collection of several genres, is this a reflection on each members’ respective tastes?

Absolutely. We all bring different tastes to this band, and we never want to feel held back by making songs that only sound a certain way. We want the audience to enjoy every part of the album, but also we want to make ourselves happy. We don’t like to be bored.

What is your approach to creating music as a band? Does it start with an idea that contextualizes, or with sound? What about when it comes to production?

We love to hang out and jam out songs, which we later arrange and refine. Sometimes we individually write songs, record them on our phones, and finish them together later. It depends on the song, we’re very flexible and supportive of one another. When it comes to production, we record when the song is mostly fully formed, but we are always open to changing songs in the studio. We also have worked with a producer, Toshi Kasai, for our last two albums, and he always inspires us to do better.

Since Perla is your debut album, what was the group thinking as you went into the creative process and later recording?

We didn’t go in with an album idea initially, but Toshi pulled a full-length album out of our sessions. We had about eight songs we were committed to recording, but ended up finishing 11 songs in total. We’re really proud of this material and how many genres it progresses through, while being cohesive in concept.

Do you have any memorable moments from making this album?

Every day was a joy, especially now since we can’t really make music or perform live during the pandemic. There were several hilarious moments that made us laugh so hard we peed. Toshi likes to input musical instruments we don’t play with live, such as a slab of wood!

In terms of band history, tell me more about your name. Why was it important to you guys to take the “bitch” back?

Our band name is in honor of every colorful weirdo with love in their hearts and a song in their throat. We wanted to take bitch back because so often it is used as a derogatory term, but as women, we wanted to use it with pride and power.

I love the “mom rock” approach to the album title. How did this come around and would you say it influences your sound as a band too?

Perla is a tribute to our drummer’s mother, Perla Esguerra. We wanted female figures in our lives who have influenced our joy and support in making music to have the spotlight. Moms are powerful, give life and love, and they are supportive. All our moms are our biggest fans and our biggest influence.

Speaking of moms… what did you guys listen to growing up? Did those influences come out during this album?

Hell yeah they did. We all listened to plenty of different music. Lauren listened to a lot of British rock, blues, and classical music with her mom. Teresa’s mom bought her whatever latest rock music she wanted, such as Guns N’ Roses. Chris’s mom bought him a live Simon and Garfunkel album and The Offspring to kick start his rock taste. Lilah’s mom bought her ‘Nsync, Backstreet Boys, Spice Girls, and Britney Spears on tape which completely started her love of pop music.

As Prism B!tch makes their vibrant, unapologetic debut, they want their listeners to “feel loved and like they have a friend while they’re listening to ‘Perla’.” Their goal is that the album to “ease loneliness and possibly give listeners a chance to forget their worries and have a good time with us.”

They also want you to say hello to your mothers, from the band.