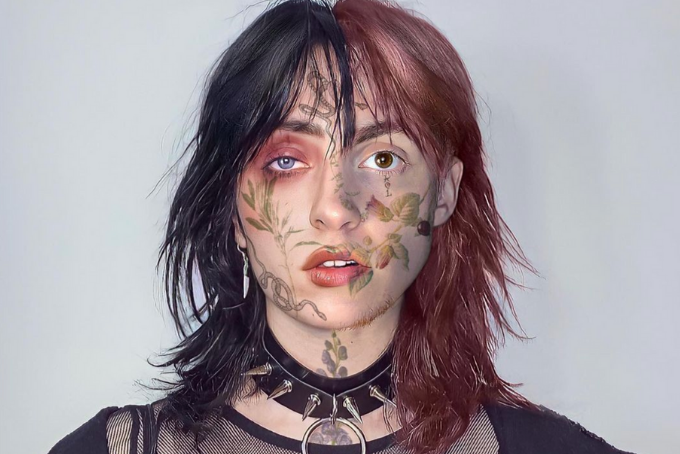 What do you get when two non-binary powerhouse musicians collaborate? A cover of an old Lana Del Rey demo that’s 10 times better than the original, apparently.

Boy Jr. and Medusa, both incredibly skilled musicians in their own right, have come together to cover “Kinda Outta Luck,” a demo Lana Del Rey made in 2010 but never released.

This song is a cult favorite among Lana’s super fans—you can find it all over YouTube and SoundCloud with tons of streams and likes. However, I had never heard it until this cover was released (probably because I am not a Lana super fan). After hearing it and loving it so much, I thought I might even like the original, but I did not… because it’s truly the production and performances that make it. Without Medusa and Boy Jr., this song simply does not sing.

I like to think this is good karma for something I personally did, because to me, this is a perfect song. It’s like a mysterious entity looked inside my music brain and said, “OK, this is what they like, let’s give them something that aligns perfectly with that.” All of this may sound dramatic, but really, I would not change a single piece of this song. Why? Well, I could probably write a 10-page essay on that, but let’s just hit the highlights.

The drums. Oh my god, THE DRUMS. Listen, I don’t pay that much attention to drums normally. I know, I know, drums are hugely important, but to me, they are typically background noise. But these drums are expertly crafted. They come in for the first time about 40 seconds in, and when they do, it’s a huge “wow” moment. My ear follows every bass punch and snare roll until I’m dizzy. There’s good variation here, too, which adds so much energy to the song. It really keeps you on your toes. I think it’s also worth noting that this song made me question my hatred for trap-style beats, a feat only previously accomplished by Charli XCX, 100 Gecs and the like.

You ever heard someone sing and think, “Wow, that person sounds really cool, I want to be their friend.? Well, that’s definitely how I feel about these two. Boy Jr. has a really rich timbre to their voice, which is a big part of why I became a fan in the first place. For lack of a better comparison, it feels somewhat like Zooey Deschanel if she were an androgynous rockstar. Medusa’s voice is completely different than that in timbre, but that works so well here—it’s a very harmonious kind of contrast. The way they sing is almost like Dorian Electra if they were more even in their style and also kind of talk-sang. I’m not sure that I can really do either one of them justice with my simple words, but trust me, it’s so cool it should probably be illegal.

The last reason this song is a new favorite for me is actually several reasons that I will be putting under the same umbrella: “transformation.” This, to me, is the biggest feat here. It takes a lot of skill to strip a song down bare to its foundation and build it back up from scratch, and Medusa and Boy Jr. did this perfectly.

From what they’ve posted, it seems they intended to make this in the style of Grimes‘s “Kill V. Maim”. When I heard that, I could hear the influence, but it still feels like its own beast. It has some hyper-pop elements, vocal processing and trap beat among the most prominent. It also does feel like a more contemporary take on rock music, like “Kill V Maim.” The production is very dark and heavy at times as rock tends to be, yet it still maintains an element of whimsy. The way they switched off singing different parts and processed the vocals adds to that as well, with Medusa yelling, “Wrong!” as the beat drops out, and Boy Jr. coming back in the next second to finish the phrase. This is how the fusion of style here becomes so successful; it’s all about playing with contrast.

What’s that? You haven’t streamed it 100 times yet? Unspeakable! Fake fan! Do it, I dare you – you’ll thank me later.