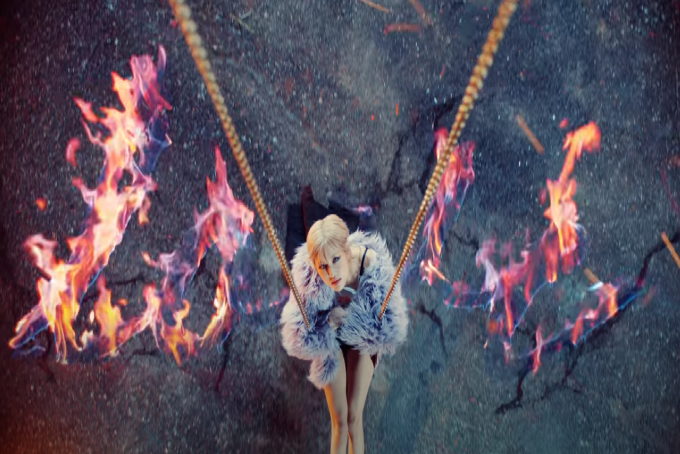 The day has finally arrived, Blinks! Blackpink member Rosé has released her highly anticipated solo debut, a two-song package aptly titled R. Along with the release, the singer has dropped an explosive (quite literally) music video for the lead single, “On The Ground.”

The track itself is an effective mix of acoustic pop and EDM beat drops. The inclusion of EDM is definitely reminiscent of Blackpink’s work, but the softer moments in the verses play strongly into Rosé’s wheelhouse. Her vocal delivery changes with the genres, too, with her airy vocals dropping slightly in the post-chorus and including some rap-like style in the backing vocals. She has the kind of voice that is so full of earnestness and emotion, that it would be hard to hide it if she tried. This, of course, is a major plus as she pulls you in and leaves you hanging on every word she says.

Lyrically, the song is about reaching the top, only to realize that you already have everything you need. “I worked my whole life // Just to get right, just to be like // ‘Look at me, I’m never comin’ down,” Rosé reflects in the chorus. When talking about the song on YouTube Released, the singer explained the meaning of the song, saying, “Basically, the song is kind of about looking for answers in life, for a purpose in life, and I feel like people, especially these days, can relate to it. Sometimes when you’re always kind of on that roll, you kind of forget to take care of what actually matters to you the most, and it’s just a song that says that everything we need is already within us. There’s no need to go out and look for it.”

The accompanying music video reflects the message of the song in a highly cinematic way. The video features a lot of explosions, including a limo being set on fire, and Rosé on a swing set while the ground burns below her and sparks go off in the background. There is a particularly striking scene where the singer, clad in all black and a wide-brimmed hat, stands on the stairs to Heaven, with the words “ROSES ARE DEAD, LOVE IS FAKE” carved into the steps. This could be another version of Rosé who, while on the path to fame, could have lost who she was in the process. These intense action moments are balanced by touching scenes of a “past” Rosé and a “present” Rosé, the past one playing the piano while the present one watches. The singer stated previously that these scenes are representative of her never forgetting where she came from and the dreams she had growing up.

Check out the video for “On The Ground” below and Rosé’s debut release R is now available for streaming.