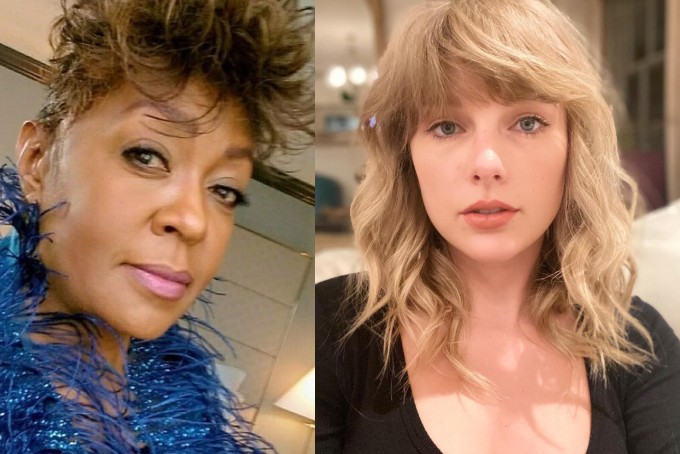 Taylor Swift has Anita Baker’s back.

The “folklore” singer recently shared her support for Baker amidst her fight for her masters. While Swift is nearly half her age, she is in a very public battle with her old label, Big Machine Records, over the sale of her masters to Scooter Braun.

Similarly, Baker is chronicaling her own fight for her masters on her Twitter page for the past few weeks. The 63-year-old R&B singer is encouraging her fans to not stream, listen, or buy her music until she is given the right to own her music.

🎁Miraculously… i have out-lived *ALL, of my Artists Contracts🎈 They no longer "Own", My Name & Likeness. And, by Law…30 yr old, Mstrs are 2B Returned, 2 Me🎼 Unfortunately, They're gonna make me Fight 4 it. I'm Prepared, 2 do that. Please Dont advertise/buy them ABXO🎈💓 pic.twitter.com/PXe9xzsJK0

In a separate tweet, Baker applauded Swift for “the good fight” she has been in for Swift’s own masters (and the right to re-record old music). Baker has highlighted that Swift’s recordings and re-recordings continue to sell “again & again,” proving their staying power.

I’m cheering you on in your fight to get back your work, and appreciate your support so much!! Thank you 🙏 💗

Baker released her debut album, The Songstress, in 1983.  Since then, she has accumulated a catalog of hits over her career, including “Sweet Love,” “Caught Up in the Rapture,” “Just Because” and “Giving You The Best That I Got,” which went No. 3 on the Billboard Hot 100.

Initially, the fight for her masters began with Baker filing for ownership under copyright reversion, a provision of U.S. copyright law that allows musicians and songwriters to regain control over works that were labels and/or publishers held after a 35-year period. For Baker, this applies to two of her albums, Songstress, and Rapture.

Chance The Rapper also offered his support for the R&B superstar with a tweet telling everyone not to listen to her music until she gets her masters back.

DO NOT LISTEN TO NO ANITA BAKER TIL THEY GIVE HER HER MASTERS BACK
TELL YO MAMA
TO TELL A MAMA https://t.co/IrnNLn1eZW

We love to see all the support for artists to own the rights to their work! Here’s hoping that Anita Baker is able to own her masters, or perhaps, take a page out of Taylor Swift’s book and head back to the studio to rerecord on her own terms.