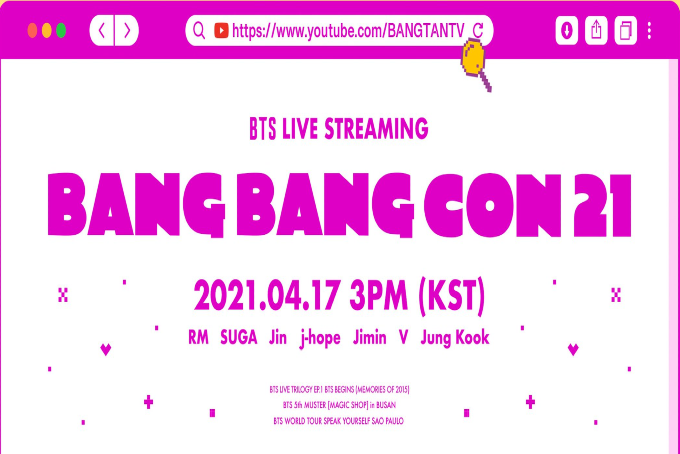 “BANG BANG CON” is back ARMY! On April 11 at midnight KST (Korean Standard Time), BTS starting posting images on their social media, building up to reveal that they would be hosting BANG BANG CON 2021 on April 17, starting at 3 PM KST.

This year’s event will only take place on April 17, featuring three concert performances. The show kicks off with “BTS Live Trilogy Ep. 1 BTS Begins (Memories of 2015)”. Fans will then be treated to “BTS 5th Muster (Magic Shop)”, hosted in Busan. Finally, the event will close out with “BTS World Tour Speak Yourself” in Sao Paulo.

It is unknown if BTS will follow up this year’s festivities with another live-streamed concert like last year’s “BANG BANG CON: The Live.” The group and their management at Big Hit Entertainment (now HYBE), established “BANG BANG CON” so fans all over the world would still be able to share a concert experience. Like many artists, BTS’s Map of The Soul Persona tour last year was postponed due to the pandemic.