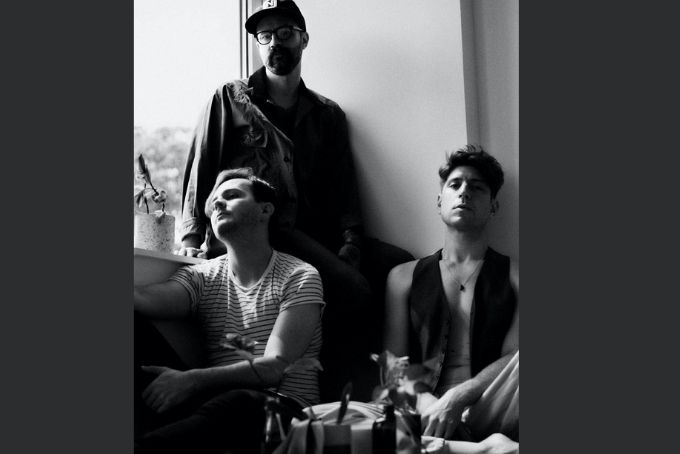 Alt-pop band Record Heat (formerly known as Spirit Animal)—made up of Steve Cooper on vocals, Cal Stamp on lead guitar, and Paul Michel on bass—recently released a three-track EP 1. Along with their release, they’ve also collaborated with visual artist Jason71 to create a NFT.

Record Heat sat down with Soundigest to talk about the EP, the NFT, and more.

Tell me about 1. What do you want your fans to take away from this EP? What was the inspiration behind this collection of songs?

Our career has been a bit of a roller coaster, with some pretty high highs and some fairly low lows. We’ve done the DIY thing, the indie thing, and the major label thing. On 1, we ended up dealing pretty directly with what all that feels like.

Lines like “Living in a four-wheel basement // Two-star three-year vacation // So far? // Nathan” rank among Steve’s most personal and direct. Meanwhile, “If we catch you acting up // Beep beep like a bus now you’re backing up,” is probably me at my most irreverent. Even though these songs are reflective, they’re still fun.

Cal – how did you come about writing in bathrooms? Is this a go-to thing now for all your songs?

Ha! I grew up with five people in a two-bedroom house, so as a kid I would often lock myself in the bathroom just to be alone for a while.

I get sort of agitated when writing sessions become too noisy and chaotic. Nothing grates quite like a bunch of topliners humming disconnected falsetto melodies while a producer blasts random bits of track. My natural reflex is to retreat to the bathroom so I can work things out in peace. Sometimes it’s just the only way for me to get anything done!

How has the band’s creative process changed/adapted over the pandemic?

We’ve done a lot more remote writing and recording. There were a couple trips to the studio, but as much as possible we worked from home and emailed each other files and ideas.

We each have our own home setup, so fortunately we’ve been able to get a lot done without physically being in the same space. It’s not nearly as fun or rewarding as in-person work, but it’s better than nothing.

What was your favorite track on the EP to create and why?

“Nathan” was a fun one for me because we wrote it with an old friend named Mike Del Rio. Mike was one of the first people I met when I moved to New York. We used to hang at Rockwood Music Hall in the Lower East Side. This was back before I joined up with Steve and Paul.

Fast forward a decade later and we’re signed to Atlantic, Mike’s killing it in LA with his band POWERS, and we decide to link up and do a song. It’s always fun when worlds collide and you’re able to reconnect with folks from back in the day. It’s even better when you get a cool song out of it.

Do you have any memorable moments from the recording or creative process of this EP?

We wrote “Network” with megaproducer “Sir” Nolan Lambroza. He’s done huge pop records for artists like Nick Jonas and Selena Gomez. We were at his place in LA and I think we might have felt a little too much pressure to deliver because we were really hitting a wall. It was the only session from that trip where we just couldn’t get a damn thing going.

Around dinner time we decided to take a break and go get some food. I think we went to Pink Taco? Anyway, we finished eating, went back to his place, and something finally clicked because in the hour or so after dinner we wrote “Network.” It goes to show that sometimes you just need to step away and grab a taco!

How did you guys come up with the idea of doing an NFT for the release? Can you explain that a bit?

We did it as a collaboration with the visual artist Jason71 and we’re thrilled with how it came out. For us, being an artist is all about making stuff we love and then sharing it with people who love the same stuff we do. Releasing the EP art as an NFT was an exciting new way to do that with our fans.

Record Heat wants their fans to know that they “…Really engage with our audience. Drop us a line and we’ll definitely respond. We are @recordheatus on socials. We also have a Patreon where we make special content and do virtual hangs with fans. And of course when touring resumes, you can find us at the merch booth after the show.”