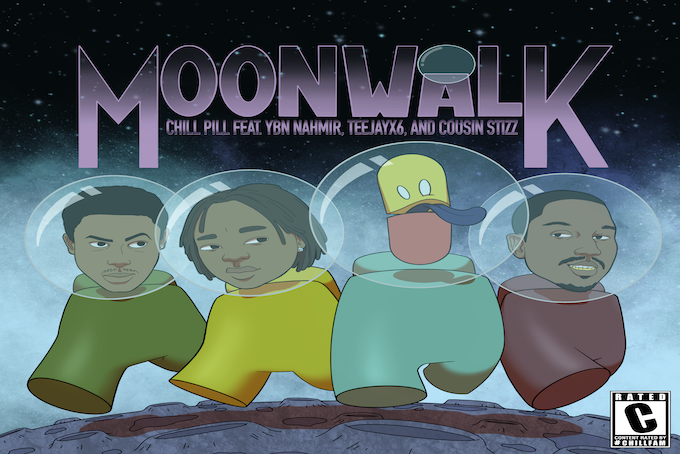 What happens when four creative geniuses get together? You get a certified banger. That’s exactly what has happened under the collaboration of chillpill, YBN Nahmir, Teejayx6 and Cousin Stizz on their new song “Moonwalk.”

When talking about how “Moonwalk” was put together, chillpill says, “I was in the studio with [Cousin] Stizz, and he just went in the booth and freestyled his verse and hook all in one take. After that, whenever I was in a session, I would just play it – and everyone just started jumping on it. Actually, if you listen closely to the record, in the background you can hear everyone in the studio chanting, having a good time. I love that and really tried to keep the rap cipher type vibe”.

And it’s true, around 0:24 of the song and throughout other parts of the track, you can hear people chanting in the back. It’s that authentic vibing with the music which makes this single all the more special. The casual mood in the recording studio is perfectly aligned with the music that came out of that session: good, chill fun.

Cousin Stizz describes his time on the track “[It was] fun as hell. It’s always a good vibe at chillpill’s spot. We started this song a while back and it just felt good right away. It was fire seeing it all come together with Teejay and Nahmir too. I wanna see yall out here moonwalking this summer.”

In addition to the release of the track, chillpill released an accompanying space-themed, “Moonwalk” game.

Nothing is better than having a feel-good track playing in the background while you are enjoying the summer breeze, and it’s evident that this track is the perfect song for pregaming or just vibing. Get up, get out and moonwalk with your friends to this track. Click the link to be able to save the song on any platform.