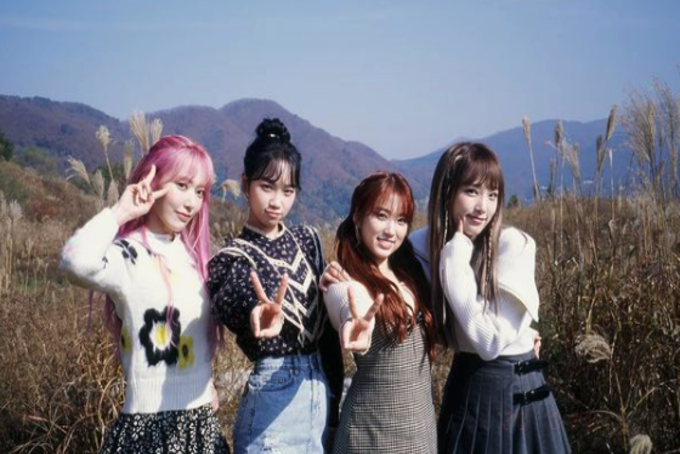 As their time as a group is coming to an end, IZ*ONE is making sure that their fans know how much they love and appreciate them. On April 19 at midnight KST, the 12-member girl group surprised fans with a music video for “평행우주 (Parallel Universe).” The group premiered the song last month during their final live-streamed concert “ONE, THE STORY.”

“Parallel Universe,” written by group member Kwon Eun Bi, is a thoughtful and heartfelt ballad dedicated to the group’s fanbase WIZ*ONE. The song serves as a source of comfort for fans, letting them know that they will never forget the time they have spent together and that their memories will always survive as though they exist in another universe. Even with the song serving as the group’s swan song, the track is uplifting and hopeful, tying into the lyrics and reassuring fans that the members’ futures will be bright as they embark on new ventures.

The accompanying video for the song features footage from the final concert as well as behind-the-scenes shots of the group members. There are also touching moments of the members thanking fans for their support throughout their two and a half years as a group. The video, like the track, is very emotional, but also brings happiness as fans get to see the girls having fun backstage and performing.

One particularly emotional scene is when the girls are sitting and watching fans sing along to their music on the screens behind their stage at their final concert. The members get emotional, being brought to tears as they see just how loved they are by fans all over the world. The video ends with the group’s goodbye at the end of the concert, as the members express their appreciation through tears for all the love and support they have received.

IZ*ONE was formed back in 2018 as part of the Mnet idol audition show “Produce 48.” The group officially debuted in October of that year. On March 10 of this year, it was officially announced that the group would be disbanding as originally planned in April 2021.

Check out the video for “Parallel Universe” below!