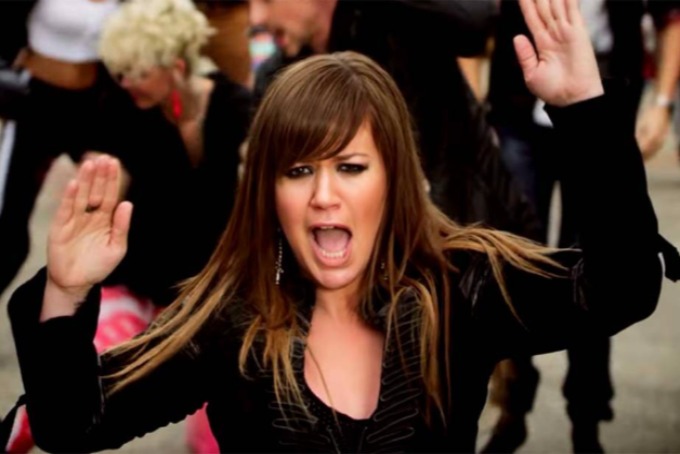 Once upon a time, Clarkson was a rising star and an “American Idol” winner; today, she’s definitely arrived. Over the years, she’s earned a reputation for being a badass mom who performs barefoot and lights up any stage she’s on. She’s got her own  Emmy-award-winning daytime talk show, three Grammys and has been mentioned enough times by Steve Carell on “The Office” — and in that wax scene from the “40-Year-Old Virgin” — to be a pop culture icon for some time.

In honor of her 39th birthday on April 24, we’re revisiting some of Clarkson’s best bangers.

‘Stronger (What Doesn’t Kill You)’

No matter how much time goes by, this 2012 bop can still light a fire inside us. If you’re having a terrible day, “Stronger” is the cure. If you’re going through a bad breakup, queue “Stronger.” If someone’s double-crossed you, then you’ll definitely want to blast “Stronger” as loud as you can.

In “Stronger,” Clarkson is the leader of people who are just fed the hell up with being stomped on, discounted and otherwise disrespected. Although its lyrics point to a failed romantic relationship, they translate as motivational sentiments for any situation. How can you not get fired up with lyrics such as these: “What doesn’t kill you makes a fighter // Footsteps even lighter // Doesn’t mean I’m over ’cause you’re gone.”

Another song that perfectly captures Clarkson’s over-it, can’t-be-bothered vibe is 2006’s “Walk Away.” This song is the perfect combination of rock, pop and raw energy. It’s basically gospel for anyone who’s been judged and questioned because, yes, finally someone gets it. And, honestly, it’s pretty cool when Clarkson is the one who’s understanding your struggle.

From its first lines, she says loud and clear that she is not a fan of the peanut gallery: “You’ve got your mother and your brother // Every other undercover telling you what to say.” She wants to make her own decisions, and she wants those in her life to be confident enough to do the same. If not, as she puts it, they can “walk away.”

‘Since U Been Gone’

For many people, this is the Kelly Clarkson song that caught their attention and made them fans. It’s impressive, given that it’s one of the first songs she released after her “American Idol” win. Nearly two decades later, “Since U Been Gone” has stood the test of time as a truly incredible pop song and an empowering breakup anthem. Where some artists sing about how sad and lost they are after a relationship’s kicked the bucket, Clarkson goes another route entirely: She sings loud and proud that she’s relieved it’s over because she can finally breathe again.

“Since U Been Gone” is impressive lyrically and vocally, and it solidifies why Clarkson deserves every ounce of fame and acclaim she’s received over the years. All hail, Clarkson; and happy birthday, you wonderful goddess.