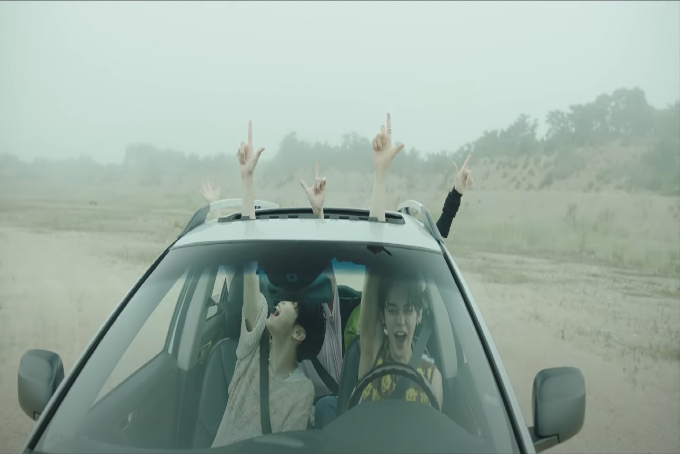 The indie pop-rock inspired track is full of energy and serves as a perfect vessel for the group’s introspective lyrics. Rapper Yeon-jun, who marked his debut as a lyricist for this track, says that the song, inspired by the TV series The End of the Fxxxing World, a comedy-drama set during the apocalypse. Vocalist Huening Kai added that the group’s newest release “is about fighting against the world when you face something unexpected and baffling.”

The song reflects the group’s continued growth not just as songwriters, but as young men. Throughout their career so far, TXT has been able to tap into the complex and conflicting experiences of youth. This track further pushes the group’s message that no matter what life throws at you, there will always be others who will stay by your side and help you get through it. Yeon-jun’s debut as a lyricist is a strong one, creating strong imagery with a visceral delivery. All of the members showcase their vocal abilities beautifully, once again showing how much they have grown as artists.

The accompanying video is a cinematic journey, following the members as they get into all kinds of trouble, eventually ending with the boys coming together and forgetting their troubles now that they have each other. The performance scenes feature the members singing and dancing atop a moving platform, embracing the rock energy of the track. Continuing with its film/TV influences, at one point we see Taehyun wearing an arm cast with the word “LOSER” written on it, before someone off camera covers the “s” with a “v,” a reference to the horror film “It,” where a group of kids, much like the theme of this song, are considered losers in their everyday lives.

The music video encapsulates the difficulties of reality and the beauty of freedom wonderfully. Throughout the video, there are other people seen with the members, but their faces are never shown. These moments put the fans watching in their place, with it being a way for TXT to show fans that they truly understand what they are feeling and will always be by their side.

Check out the music video for “LO$ER=LO<3ER” below!