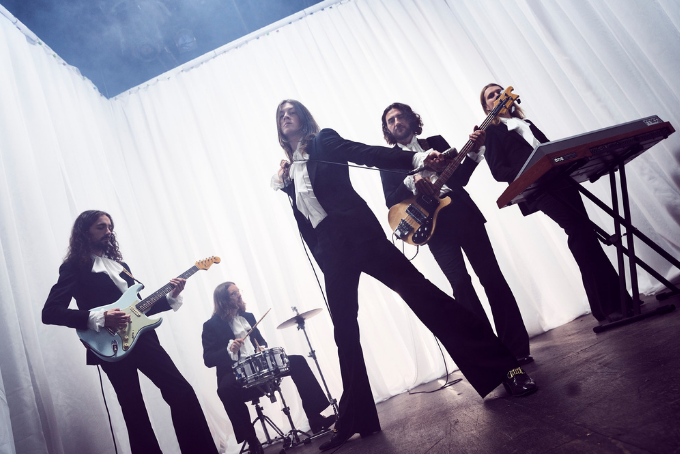 In January 2020, Blossoms put out Foolish Loving Spaces, their critically-acclaimed third studio album. Back then, lead singer Tom Ogden told the Daily Star that the band had already been working on their fourth album. He stated, “it’s crazy, as the first single from our fourth ­album is pretty much done… We don’t want to wait too long before putting out ­something brand new.” As promised, a year and a half later, Blossoms released their new single “Care For.”

Long-time collaborators James Skelly and Richard Turvey produced the disco-infused love song. In addition, the strings were in charge of Rosie Danvers, who has worked with Nothing But Thieves and Adele.

Ogden described the song as “very direct.” He also revealed that “in the past, I’ve stolen little lyrics from things I’ve been reading, but this wasn’t like that. This was one of the ones that kinda just fell out.” Sonically, “Care For” is reminiscent of many bands but of none at the same time. Blossoms love ’70s music, and they take influence from that era to create new and original tunes. Tom told NME that he and drummer Joe Donovan used to work at a hotel in Stockport. There, they were used to listen to a lot of disco music at weddings, birthdays, and singles nights. Ogden stated, “those kinds of songs would always come on and I think they just went into my system, and they always get people up dancing. It’s like feel-good wedding music.”

‘Care For’ our brand new single is out now! Produced by @JamesSkellyBand & @richardturvey, listen now + watch the new video directed by @dahditdit1 at the following link https://t.co/oHPDBGjJad pic.twitter.com/AgwVAyiROX

Tom drew inspiration for “Care For” from his strong relationship with his wife Katie. The couple tied the knot on August 7 at Stockport Town Hall in a beautiful ceremony with friends and family. Joe, who’s also Katie’s brother, told BBC Radio 1 that “there couldn’t be a better guy [than Tom] to marry my sister.” The lyrics “She is so self-assured / As she walks out the door / She’s quite the optimist / Who never likes to call it quits / And when the day is over / She pulls me in closer / She stops me in motion / Oceans calm” showcase the couple’s bond and Tom’s admiration for his wife.

Paired with the song, Blossoms also unveiled a stylish music video. Wearing Olivia Annabelle ’70s-inspired shirts, the band performs “Care For” in a very classy manner, but they also maintain the fun essence that characterizes them. From bassist Charlie Salt showing some cool dance moves to keyboardist Myles Kellock swapping places with Joe, “Care For” is the perfect video for the perfect song.

Definitely, “Care For” is a marvelous tune and a great choice for a first single. Blossoms just keep on delivering the best music they can, and we’re grateful for it. The band will be touring the UK very soon, and you can get tickets now on their official website. You can also stream “Care For” on Spotify and Apple Music and watch its music video below.