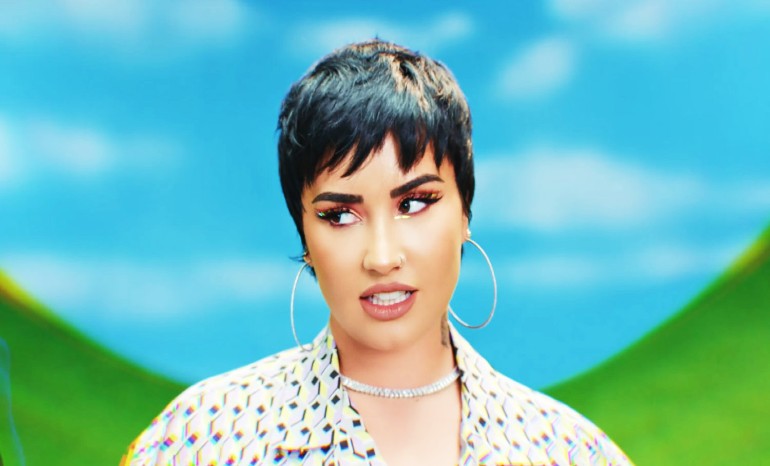 Singer Demi Lovato celebrated their 29th birthday on August 20th with the release of a new music video for “Melon Cake,” a track from their latest album. Dancing with the Devil… The Art of Starting Over. “Melon Cake” was inspired by Lovato’s own less than happy past birthdays.

Last year, the former Camp Rock star revealed on the Ellen Show that previous managers were obsessed with Demi’s diet and appearance, banning all sugar other than once a year on Lovato’s birthday where they allowed a “cake” made out of half a watermelon and fat-free whipped cream. These restrictions exasperated a long struggle with bulimia and other disordered eating behaviors. With this song, Demi’s reclaiming their power this birthday with an anthem about escaping from the pressure of expectations and loving yourself for who you are. But parts of it taste a little artificial.

The music video begins with a young girl entering a dark, shadowy bakery to purchase a cake. But not even 20 seconds in, and the incredibly unsubtle product placement distracts from serious storytelling with a lingering zoom of the Chime logo on her Visa credit card and a digital banking SMS that this small girl relishes in checking on her phone. The mood whiplash continues as the video transitions immediately to Demi rocking a psychedelic Western look surrounded by rainbow spotlights and later singing in an idyllic green field. The sing-song rhythm and bright visuals represent Demi gaining freedom from an oppressive and controlling team.

“Finally get to do things my way,” Demi sings triumphantly, staring down the camera. The styling in the video pairs campy makeup like glittery eyebrows and striking lip colors with a more traditionally masculine wardrobe of loose button-down shirts and long structured black jackets. Demi publically came out as non-binary this past spring and it’s refreshing to see how the “Confident” singer is embracing different gender expressions in new projects. However, after about a minute and a half of close-up shots, the “Melon Cake” video starts to lose its flavor.

The entire video just alternates between three different settings of Demi singing (stage, field, pool) and feels like any other popstar production rather than an empowering anthem of overcoming an eating disorder. Some of this surface-level cinematography is likely the fault of the music video’s director Hannah Lux Davis. Lux Davis, has been a long-time collaborator of Demi and other pop megastars like Ariana Grande, directing notable projects like Grande’s “7 Rings” video and Lovato’s 2017 hit “Sorry Not Sorry.” However, Lux Davis is regularly criticized for her overreliance on neon lights and beauty shots. More often than not the artist spends the runtime pouting prettily into a camera lens rather than showing a fully fleshed-out story.

In the case of a song like “Melon Cake” that pulls so deeply from Lovato’s own traumatic life experiences as well as those of millions of their young fans, there was a missed opportunity with this video to do something meaningful. Demi sings about how an assistant once got fired for hiding chocolate in the backseat and ends the verse with a snarky, “That’s a true story.” This would’ve been the perfect moment to show this scene playing out on screen. Having stereotypical Hollywood agents yanking an enormous chocolate bar back and forth in the back of a limo would’ve fit with the way the song itself pairs an upbeat sound with a serious subject matter. But instead, we get more of Lovato shimmying around in a pool.

Although Demi has publicly opened up about their own eating disorder struggles, recent efforts to be an advocate for positive body image miss the mark. Lovato got into hot water earlier this year for putting a small frozen yogurt business on blast for daring to sell sugar-free cookies. The “Melon Cake” video works as a birthday gift from Demi to Demi and a celebration of newfound freedom. However, the overall message is a lot of frosting and sweetness hiding the fact that there’s nothing substantial underneath.