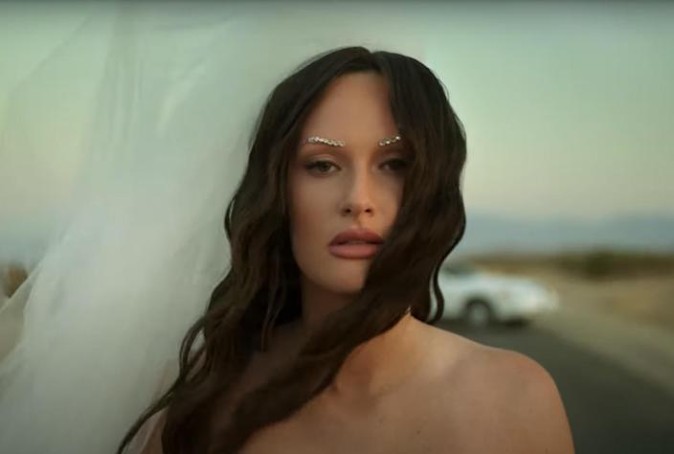 Kacey Musgraves surprise-released the self-titled track “star-crossed” this past Monday morning to accompany the announcement of her fourth studio album. star-crossed will be released September 10, alongside a Paramount+ exclusive 50-minute short film directed by Bardia Zeinali.

In July 2020, Kacey Musgraves and fellow musician, Ruston Kelly, filed for divorce after over two years of marriage. The anticipation for an album following her personal tragedy is an understatement. Musgraves is known for personal story-telling that marks different chapters in her life such as the song “Butterflies” off her Golden album. Butterflies was the first song she wrote after meeting her now ex-husband and we expect to be exploring more feelings associated with him in what she describes as a “post-divorce album, bursting the fucking bubble.”

The lead single “star-crossed” begins with harmonized vocals that are reminiscent of Sunday morning’s hymns. It fades into an unexpected but well-fitting Latin-style guitar that prepares us for Musgraves’ story-telling, beginning with “Let me set the scene.” After her first verse, we receive a lovely harp taking the place of the guitar. Halfway through the song, she adds maracas that compliment her newfound Latin influence. The song quite literally nods to her divorce with lyrics like “I signed the papers yesterday / You came and took your things away / And moved out of the home we made / And gave you back your name.”

The single feels like more of a warm-up or introduction rather than a stand-alone song. I hear it and immediately crave more. The star-crossed album will be “structured as a modern-day tragedy in three acts, [telling] an extremely personal journey of heartache and healing.” Musgraves hints at the rest of her story with the 15-song tracklisting.