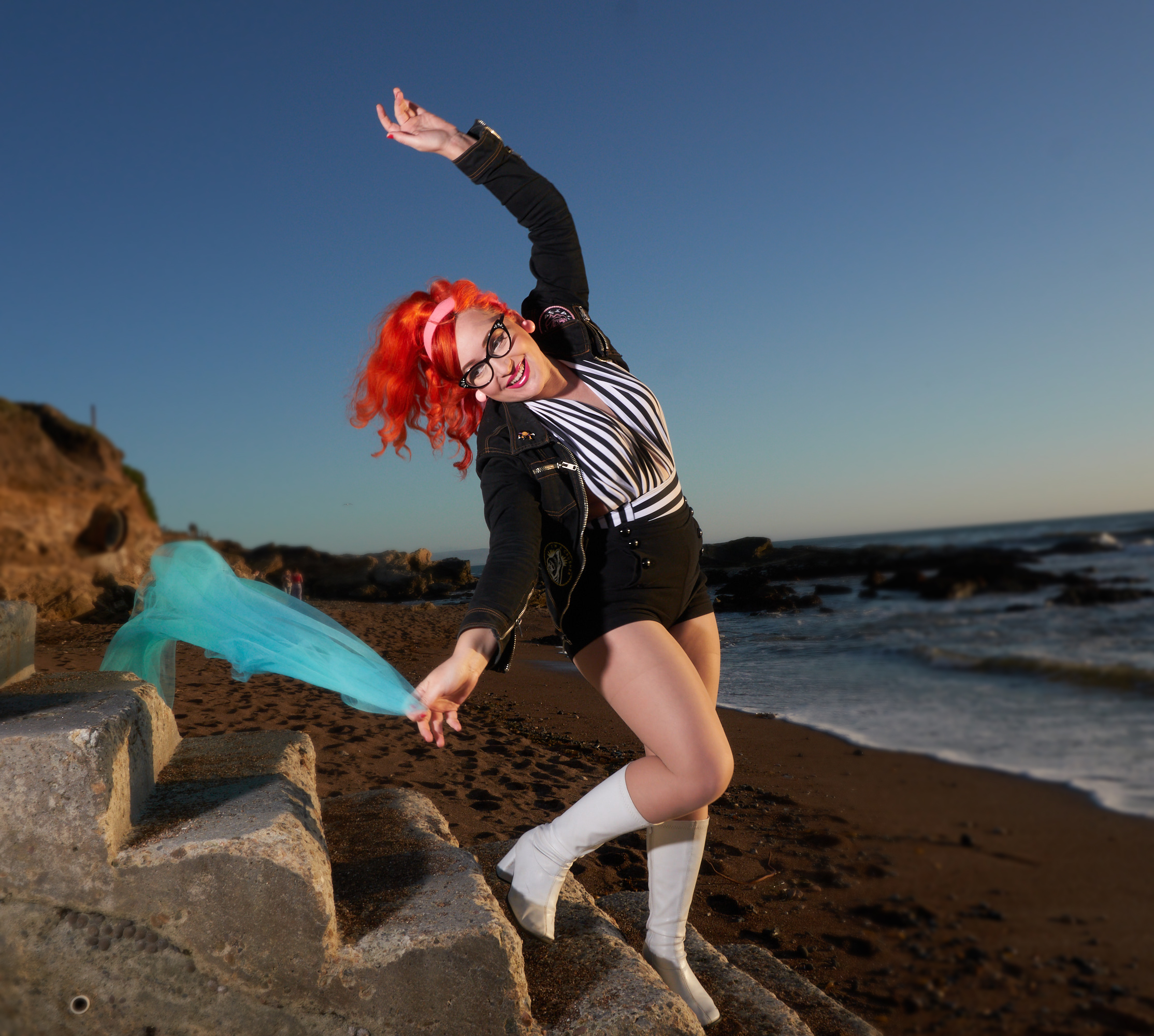 You might think a musician’s life is as far away from the nine-to-five as possible. That would be patently false. Not only do we have to metaphorically clock in and clock out regularly (if we are going to write anything of substance, for any continued amount of time), but we also follow a pretty common, universal routine. It goes something like this (with a few exceptions, of course): Write in the fall. Record in the winter.  Release in the spring. Tour in the summer. Rinse, repeat, add in some gross truck stop bathrooms and a million late night burgers, glorious highs and staggering lows, a zillion miles in a stinky van, a handful of drummers, and there you have it. This was the glamorous life I’d so humbly looked forward to when I first taped that Ramones poster to my wall!

I knew Joey Ramone hadn’t started in music till he was in his early 20s, which seemed to give me time, I thought. I had time to do everything I wanted to do and the road was open before me. Armed with a few power chords and a big personality, I figured I could charm my way into making some audience, somewhere, listen. I was going to be seen for my true, authentic self. I started playing live music at backyard shows as a teen, at real venues at 21, but didn’t get serious about pushing my music “career” forward until I was nearly 27. A geezer! I jest—but that was the way I felt at the time. Until then, I’d never led a band in any capacity that wasn’t of the hometown hero variety. I was too busy getting in my own way, running from my feelings or hiding from my own light. How could I be seen authentically if I wasn’t really seeing myself?

When I was a “backing player” It was all fun and games and the beers flowed in between songs. I was sloppy. I didn’t care. I was hiding some fear inside of me, some insecurity I couldn’t let go of. Something had to change. Leading my own band changed my life. It was a learning experience that required me to grow up in every sense of the term. The beers disappeared from the stage as I began to realize the road really was open in front of me, if I was brave enough to care a hell of a lot and still fail anyway. Failing was a given, I knew—but the dream—to be in a touring band that could maybe bring a group of interesting people into a respectable punk venue—seemed within reach. I thought of all the heroes before me who had done it. I couldn’t waste a moment.

Calling the shots and booking tours was a huge, gnarly wake up call—but my first thought was that I’d wasted so much time not doing this. I don’t know what women need to hear this, but failing is always better when you are at the wheel. Get behind the wheel and fuck up and learn and make mistakes and grow. Dudes do it all the time. The work was (and is) grueling; I was scraping with both hands against the wall, getting crud under my fingernails, just trying to get a bill together, a tour together, an album together, while also having a day job(s), keeping friendships and romance alive, creating the best songs I could while also keeping my sanity. Being an artist is hard work, and so much of that work is dealing with the stark recognition that you will live, fundamentally, outside of normal society. So many people you love will never understand why you do what you do. You will feel more alive at 2:30 a.m. after a poorly attended show than you ever will getting a promotion or other pat on the head. I saw my friends having kids and settling into the long term plans set out for their lives. I burned inside, that old familiar feeling. I knew what I had to do. This was my time!

If life as a band leader had been sold to me on paper I’d have said “hard pass,” but in reality, I live for the grind. Like so many who have come before me, this routine, writing-recording-releasing-touring-promotion became a huge chunk of my identity. The songs take root and I can’t stop till they grow eyes and a heart and legs and walk right out the door and become the property of whoever will listen. Recording on a dime, stretching my skills, working to improve and grow, touring on a shoe-string budget (with my husband, no less), shameless self promotion…it was a heart-palpitating roller coaster that I rode until I felt sick but happy. It was six years of waking up and thinking about the band first, myself second. I had time, finally time, and I was determined to make the most of it.

It slammed straight up against my dreams, my obsession and my way of living. Time was taken from me, or so I thought in the beginning. Suddenly, the things that gave me comfort (having tour dates on the calendar to practice for; an album ready for promotion; recording dates, band practice) were completely derailed. The European tour I’d painstakingly cobbled together for months was unceremoniously canceled. The full length album we had just put out, “Vintage Millennial,” would not get a proper promotional tour (or any tour, for that matter). Same went for the 7” we put out a few months after, and the cassette single after that…the ride, the routine, had been stalled and we had no way of knowing for how long. Suddenly I was alone with myself. I drank more and ate more and didn’t write as much as I wanted to. I cried, watched TV, gave up on extra curricular passions (podcasting, working out). My whole world crumbled. My ego died, then died again. My ego was like a fucking zombie. It just kept coming back and getting shot down with every new hope dashed.

Loss of tour dates, not being able to play songs from a new album an album at a venue in front of other people…yes, these sound like stupid things to whine about when so many people have died. I mean, they are stupid in any context! Music is not a human life. But I think fellow artists understand when I say it is a horrible, glorious pause. It was horrible because we had to be alone with ourselves. Our identities, and the things that made us feel our lives had meaning, stopped being relevant or plausible. On the other hand, there was a slight opening in my heart that I couldn’t quite put my finger on. A sigh of relief, maybe? The entire race had stopped. It wasn’t just my band doing nothing. It was all bands. No more scrambling, no more hustling. This was somehow comforting to me. What else could I be living for, if not for sharing my art?

Back to the ego death. A funny thing happens when your identity goes away. You realize it wasn’t your identity at all. Underneath my pathological desire to further my band, I realized I was a wife, a daughter, a friend and a partner in crime. I rediscovered my relationships with new clarity, seeing the ways I had faltered, saying the things I hadn’t had the guts to say. I saw that I had been running from certain elements of my past (playing a different show every night had been a great way to throw off my demons). I had to deal with all that junk—the stuff I didn’t know I was hiding from. Covid-19 gave me that horrible, glorious task.

I hope this doesn’t sound too pretentious, but this new human, the one I am today, is grateful for the time off from the music machine. The most important gift I received was the realization that time had never been my enemy. I was never running out of it. Stuck inside my house, sitting with my guitar I still had time—sweet, precious time to write, to grow. It had always been there, waiting for me. And so, I put down the food and remote and I set out to write. I wrote and I grew and I played. I sang and I thought hard about what I was making. This time, there wasn’t a rush to demo a song and get it into the pipeline for production—to make everything work on a wheel that was forever turning.

I let the music flow over me. I tried to see it clearly. I tried to really improve it, using a more critical eye than I’d ever had before. I was onto my own bullshit. Stripped down, without the routine, it was just me and my guitar. And that was infinitely enough. I was enough. The next time I pile into the van with a duffle bag full of expectations and desires and high hopes, I am going to try as hard as I possibly can to remember that.