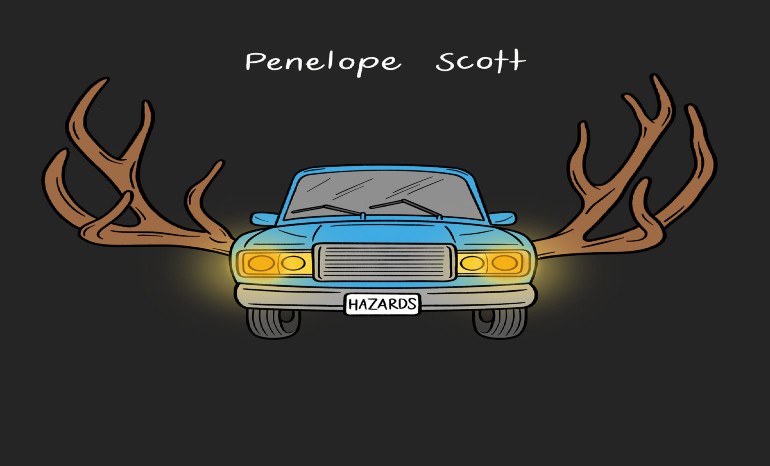 Gen Z is angry (but they’re tired of talking about it). With the monumental success of 18-year-old Olivia Rodrigo’s debut album Sour this year, there was a lot of hype about music returning to the pop-punk era. After a few years of mellow indie ballads dominating the charts, angsty anthems with faster tempos and a harder rock edge were refreshing. However, this current pop-punk music doesn’t look quite the same as the Warped Tour and Hot Topic era of the early 2000s. Today’s teenagers are doing coming-of-age anthems with a fresh set of radical politics and frustrations to let out. No one perhaps embodies this mix of aggression and social outrage more than Penelope Scott

21-year-old college student Penelope Scott released her debut album Public Void in August 2020. Soon she found huge popularity on TikTok with a song based on an old Tumblr meme mocking billionaire entrepreneur Elon Musk. (A combination of words that couldn’t be more digitally-native if it tried).

Scott’s latest EP, Hazards, released August 27, 2021, encapsulates the unique mindset of a generation of teens and young adults stuck growing up in the middle of a global pandemic, constant political unrest and uncertainty about both their own futures and the future of humanity itself. Unlike the unapologetically sincere performances of former pop-punk icons like New Found Glory or Good Charlotte, Scott’s anger is quieter and coated in irony.

The EP opens with the hyper-pop single “7’O Clock” that explores the pain of loneliness but masks it under an interlude from a “corporate sponsorship” and a robotic techno beat. While the emo and scene movements of the aughts were regularly mocked for their overly emotional declarations of angst, Scott seems incapable of committing to a real emotion. 7’Oclock’s bridge is a testament to indecisiveness declaring “So just get wrecked, I guess //I mean you kinda failed the cool kids’ test, I guess// It’s kinda sad if this is you at your best, I guess.” This attempt to cloak insecurity underneath a mask of indifference instantly brings back a painful high school mindset that’s far more painful to revisit than even the cringiest raccoon eyeliner looks and spiky belts.

“Dead Girls” is probably the most theatrical song of the bunch, opening with a twisted version of a Girl Scout Oath where Scott makes “Insert Your Name Here” promise you won’t actually off yourself before diving into a sing-song track about all of her friends constantly feeling suicidal. The heavy-handed lyrics paired with a sort of baroque pop melody are reminiscent of Amanda Palmer’s band the Dresden Dolls in the way it blends punk brutalness with a whimsical cabaret atmosphere.

The EP’s penultimate track, ‘Warm Regards’ cracks this detached persona to present an image of someone who is so paralyzed by the future and so afraid to make decisions that they’d rather do nothing at all. In the opening verse, Scott confesses, “I’m just so sad it comes off as insincere” before going on to tell us that she doesn’t really care if she goes to college or to heaven because she’d prefer to do nothing at all.

This same lack of direction or true sense of identity carries through to the EP’s closing song, “Self Care” where Scott satirizes popular social media wellness tips like honey facemasks and expensive vitamins. After rejecting all these supposed quick fixes meant to make us feel better the music fades out with the bleak conclusion that things actually won’t “be okay.”

After listening to both Public Void and Hazards on repeat it’s clear that Scott’s message is resonating with her peers, and her YouTube and TikTok comments are full of people praising her music for being “insanely relatable” and “refreshingly honest.” If she continues to grow and mature her sound and lyrics, it wouldn’t be surprising if Penelope Scott joined the ranks of artists like Alanis Morisette or Avril Lavigne, who all spoke to a certain time of disgruntled but vulnerable youth.