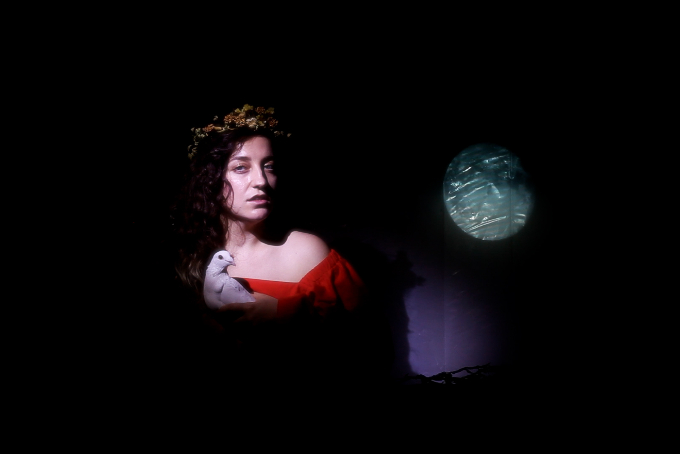 Electro-folk artist Athena Lawton recently released their first single, “Bedroom Walls,” along with a music video directed by their close friend and former roommate, Giuiana Foulkes. Unsurprisingly, the Cal Arts graduate’s debut is decidedly sophisticated and mature, despite the fact that this project began as a quarantine hobby. It has been a joy to see such a singularly elegant artist blossom in real time, as they explore what they will create and how. At the same time, the music video gave Athena and Giuliana the opportunity to showcase the talents they had already honed through formal education in costume design and filmmaking, respectively.

Although the artists behind this release are highly skilled and competent, this is not the only thing makes “Bedroom Walls” so special. The love that went into making this lullaby is the wow factor for me; you can feel it seeping out of every detail, sending waves of emotion to the listener. As a result, both the video and the song itself are deeply moving. Athena let us know that the song has an equally moving backstory, which made me quite teary-eyed. I now think of it whenever I hear the song, which only adds to the profound sentimentality already ingrained in it. Here is what they had to say about the meaning behind “Bedroom Walls”:

“I wrote this song when my best friend and uncle, Monty Lawton, was in the hospital during lockdown and I was unable to be by his side. He had loaned me a Zoom H1n field recorder to document my ukulele songs, and when I opened up the files I found a piano improv he accidentally left on the memory card. I made my first ever loops using sections of that improv, which fit perfectly with a melody I had recorded weeks before. I wrote and recorded the vocals in one sitting, added a beat, and sent it to him In the hospital that day.

‘Bedroom Walls’ is about depression and being unable to see outside of your own despair, but caring so much for another person who you know is also struggling, and begging them to try. It’s about friendship, memories, and not being able to be near the people you love.

Athena’s uncle is an artist in his own right; he designs furniture, writes poetry, plays piano, and dabbles in many other things I’m sure. He and Athena are incredibly close, and support each other’s art fully. As such, they are both heavily influenced by each other’s art. Athena shared with us that their uncle actually included a poem in his book which was a response to “Bedroom Walls” without telling them. This brings to mind a sentimental scene wherein someone is leaving a loved one notes scattered about the house or in their belongings to be found later, and bring an unexpected smile. This, too, made me tear up a little.

One of the details I love about “Bedroom Walls” is that Athena’s inclusion of lunar symbolism was inspired by Monty’s reference to the moon in his own poetry. It’s also very interesting given the history between the moon and bipolar disorder, which Athena has spoken about having. It was long thought that bipolar disorder was caused by the moon pulling our minds in different directions, much like it pulls the ocean and creates the tide. Athena also confirmed that this also ties in to the oceanic motif in “Bedroom Walls,” which I particularly love. There are so many layers of meaning here to explore; it’s truly magical.

Throughout the song, there is a great tension between soft, sweet elements and harsher, distorted ones. Not many people may think to put these together but that is one of the things I feel makes electro-folk production so elegant. You don’t need much to make a song like this truly sing, you just need a few well-curated and simple sounds to allow the rest of the track to shine. Athena’s soft vocal and tender lyrics coalesce with Monty’s piano loop to work against the pounding drum beat, storm sounds, saturated sonar ping sample. This tension is not just useful and necessary sonically, but also meaningful.

Coming back to the ocean themes, the track and the video both reference moons, storms, and oceans a lot. The sonar ping, for example, is not just there because it sounds cool, it is there because it translates literally to searching for someone or something, and is often used by submarines or by those on shore searching in a storm. The pounding of the drum for me has a triple meaning; it seems to represent adrenaline coursing through the body, the pounding of the ocean waves on the rocks, or thunder in the sky. The thing that ties these elements together is, of course, the literal storm sample that is used in the song. I think this was a good choice because it makes this message less obscure to the listener.

I also feel that, in light of these things, Athena’s vocal as well as the other soft sounds represent a lighthouse, calling out to you, guiding you home. This is extremely powerful given what we already know about the meaning of the song. Athena is calling out to their Uncle, begging him to find his way back to shore.

The music video, if possible, makes the song even better. It opens up on a moon visual, which appears fuzzy and warm. The rest of the video is centered on Athena, alone in their bed, the frame never shifting. The moon tracks around them, tracing its path in the sky several times over. Their surroundings change repeatedly but they stay in the same spot, calling out to us through the storm.

They sing to us through their own apparent pain, changing several times from what appears to be PJs into extravagant red outfits, which they clearly designed themself. They wear a tunic while holding a real live dove, a symbol of devotion, navigation, the human soul, and hope, among other things. The lighting plays a major role here even aside from the moon projection, as the color scheme shifts among blues, greys, oranges, and reds, extending the sonic contrast into a visual one. Notably, the light is often treated as a spotlight, which could support the lighthouse analysis. All effects here are practical, rigged with projectors, LED strip lights, and real props.

Giuliana did a great job bringing the “Bedroom Walls” essence into the visual plane, expertly echoing the imagery and motifs from the track. Specifically, I think the setting shifting around Athena is an excellent representation of how the world seems to pass you by when you’re unwell. I’m unsure whose idea the dove was, but I couldn’t think of a better way to express the idea of calling someone home, of bringing them a light to see them through the storm.

Overall, I think “Bedroom Walls” is an incredible debut, especially for such a new independent artist. Maybe I am biased, but I think the best kind of art is art that can simultaneously make you weep and bring you hope, immersing you in its world completely. That’s what “Bedroom Walls” is for me. I hope it can be that for you, too.