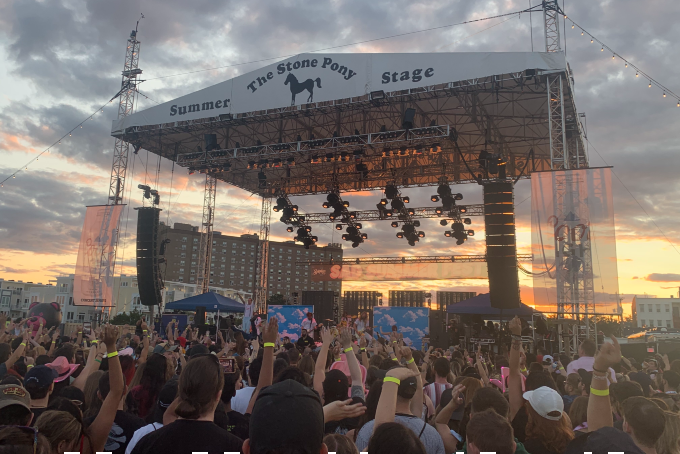 Last year, the thought of live music was a fever dream. Today, our favorite bands are bringing stacked lineups (safely) to a city near you. Sad Summer Fest was born in 2019 to bring together pop punk and emo bands for a tour after the Warped Tour hiatus. This year, Sad Summer’s rescheduled dates for 2021 finally happened and it sparked so much joy in fans. There’s nothing that brings on a rush of serotonin quite like seeing your favorite band his the stage for the first time in almost 2 years.

With a stacked lineup, Sad Summer Fest brought together former emo kids (fondly known as Elder Emos) and new fans alike under one sky. All Time Low headlined after a crazy year in quarantine with a new album and blowing up on Tik Tok. Other key players on the tour were The Story So Far, The Maine, Movements, and Grayscale. Openers and some acts changed due to covid and health concerns, but the show still went on.

I was lucky enough to attend both the Asbury Park and Philly shows this Labor Day weekend. The energy from every audience member was radiating. Everyone was just so happy to be there dancing, singing, and making memories. The good vibes continued as the shows had fun photo booths, great merch, and a hydration station.

The Asbury show started strong with local artist Joe P (formerly of Deal Casino) whose voice is just incredible. Meanwhile, Philly got Charlotte Sands as their opener. Charlotte has been a breakout star in the past year and continues to impress with her high energy performances. Next, we had Grayscale who really got the crowd going. Everyone already was screaming the words to their new album, Umbra, that dropped just the other week. Those Philly boys brought it strong for their hometown and this tour is giving them the recognition they deserve.

Movements brought a pink cloud summer to Asbury and I have never seen so many people throw down to sad songs. Their fans had clearly been waiting for this moment for a long time. Then, of course we have The Maine, who originally founded Sad Summer Fest. And well, these men sure know how to party. Lead singer John, knows how to command a crowd. Between cracking jokes and encouraging audience members to let loose, he took all of the sad out of the summer and killed it performing hit tracks like “Sticky” and “Numb Without You.”

Unfortunately, The Story So Far was unable to make both of my shows. However, Philly fans got the greatest gift of all: the return of The Wonder Years. That band knows how to evoke every emotion from their audience at once. We were laughing, crying, screaming, and singing. So honored to welcome them back to the stage, especially in their hometown.

Lastly, we had All Time Low closing out every show. The pop-punk quartet are known for being high energy and really appealing to all ages. I saw both grown men and young girls freaking out when they took the stage playing a mix of new hits and late 2000s classics. With crowd surfers flying and light up hats bopping around, there was no where we’d rather be in that moment.

Sad Summer 2021 was really one for the books. Despite schedule and lineup changes almost every day, the bands who were there managed to make everyone feel welcomed. Additionally, vaccine/COVID test, and mask mandates made the experience feel a bit safer. With a mix of nostalgia and discovering your new favorite artist, Sad Summer had something for everyone. Hopefully, we will see an iteration of this festival tour in 2022 and it will only get better from here.