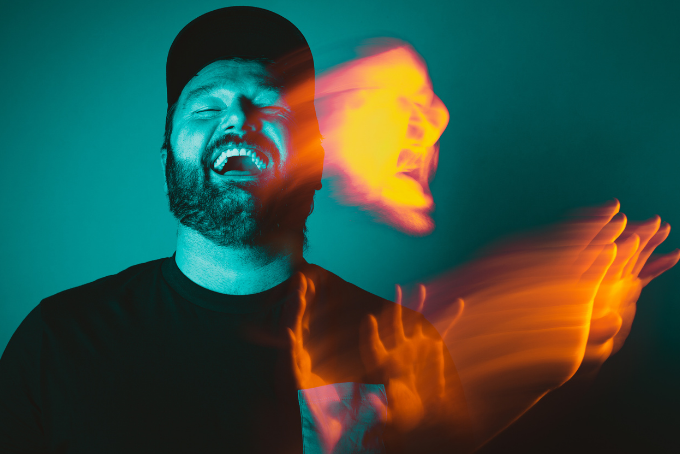 On August 27, Northampton-based musician Maddox Jones, former frontman of indie rock band The Departure, released a magnificent video, under Alex Gwyn Davies’ direction and animation, for his new single “Somewhere There’s a Plan (Believe It).” The upbeat track is exactly what anyone who’s going through difficult times needs right now. This song follows Jones’ single “Can’t Wait for the Summer,” released in April 2021, and his 2020 debut EP, Headspace.

According to a press release, Jones describes “Somewhere There’s a Plan (Believe It)” as a reminder to “find joy in the small things,” and he wishes to “bring comfort to someone who’s still waiting to re-engage with the world [after the COVID-19 lockdowns].” Maddox also stated that the animated video “is about escaping the matrix of expectations that most of us seem to end up via school, family, media, etc. The typical 9-5 doing something you don’t necessarily care about, living to blow off steam for a couple of days at the weekend and maybe on holiday. Then ultimately, finding a catalyst that can interrupt that and tasting freedom.”

The lyrics “you’re working hard, to the bone, to the limit / You’re living life in the passenger’s seat / And I know it’s hard and you might not believe it / But somewhere there’s a plan for you” reflect the lives of several people around the world who think that they won’t be able to reap the rewards of all their hard work. At the same time, Jones gives listeners a sense of hope and offers them a new perspective so that they look forward and expect great things in the future.

Having toured with The Killers, Feeder, and Placebo, Maddox Jones is no stranger to the music industry, but this new pop direction that he has undertaken shows his versatility as an artist and his commitment to his job. We had the opportunity to talk to Maddox via e-mail about “Somewhere There’s a Plan (Believe It)” and his new path as a singer-songwriter. Check our interview and the animated video for the song below.

What inspired you to write “Somewhere There’s a Plan (Believe It)”?

The song came together in quite a random way. I was in the studio with my long-time collaborator David Crawford, and he started playing a beat with some chords. I came up with the melody as a joke — instead of “just gotta let the sun shine,” it was “his name is Pinchbeck baby” as an ode to my friend Christian Pinchbeck. The whole thing happened in a fun unforced way. The concept is to just believe that somewhere there’s a plan and sometimes it’s good to let go and trust that the universe has got your back.

How do you think COVID-19 and the lockdowns have affected people’s lives?

This is a good question. During COVID, I personally had a lot of time for my friends over Zoom or on walks in the park (socially distanced of course). It was quite a surreal time. The world shut down! For once we all had a really shared experience, even though we were all isolated in our own homes. I personally felt more connected to people, neighbors, strangers. The flip side of this is obviously the many tragedies, lives lost, loved ones missed. I hope when we all return to normal life that everyone remembers this moment in time and learns from it.

The lyrics “let this melody from my head / Take you somewhere else instead” perfectly describe how music can help us go through tough times. Was writing this song therapeutic for you?

Yep, definitely. I tend to get inspired by revelations I’m having about life, and this song was written at a time when I was getting into meditation and believing more in manifesting and the universe.

The animated video for “Somewhere There’s a Plan (Believe It)” is really captivating. How was it working with Alex Gwyn Davies to create it?

I am so proud of the video! It really is a work of art. I met Alex through a mutual friend of mine, and I sent Alex the song, and he loved it. The rest is down to him. He literally dreamt up the video concept whilst he was sleeping one night, and I just think it’s incredible. The concept is about escaping the matrix, and the way the video moves to the beat of the song gives it a kind of industrial feel, which also pairs well with the whole breaking out of your work routine. THANK YOU, Alex, you did a great job!

What led you to take this new pop-music path?

I have always loved well-crafted songs. It’s really something that has naturally evolved. I’m obsessed with writing catchy songs.

What do you expect the audience to take from “Somewhere There’s a Plan (Believe It)”?

I want them to feel the song in their body with the bass line and the feel of the track and also take something from the lyrics and be uplifted. Ultimately, this song is a feel-good track, so I want it to make people smile and dance.

Who are some of your favorite musicians and bands? Do you ever draw inspiration from them?

I love a lot of artists from different genres. Artists like Coldplay, Bon Iver, Radiohead, The Weeknd, Taylor Swift. I loved listening to the last Taylor Swift record in lockdown, and, equally, I love discovering new artists on Spotify playlists such as JC Stewart and Maisie Peters. I absolutely draw inspiration from them!

What do you enjoy the most about playing live shows?

I love connecting with the audience and seeing the reaction to my songs. It also feels good to be on stage doing what I love. Live music is back and stronger than ever!

Could we say that your debut album is around the corner? What should we expect from it?

My album is due early next year and I can’t wait! Expect the unexpected, that’s all I’ll say. There’ll be some less-produced songs on there, it’ll be different from what you’ve heard before from me. I hope you enjoy it as much as I’m enjoying making it.

Are there any pieces of advice you could give to people who want to be part of the music industry?

Love what you do and be prepared to play the long game. A career in music isn’t a quick fix; it’s all about the journey and making the best music. You can make it along the way. I love it. Always love what you do and stay true to yourself; it’s all about authenticity! Also, respect everyone around you and make sure you are grateful for everyone who gives you opportunities along the way.

You can follow Maddox Jones on Instagram, Twitter, and Facebook, and you can stream his music on Spotify and Apple Music. Check out Maddox’s video for his previous single “Can’t Wait for the Summer” below.