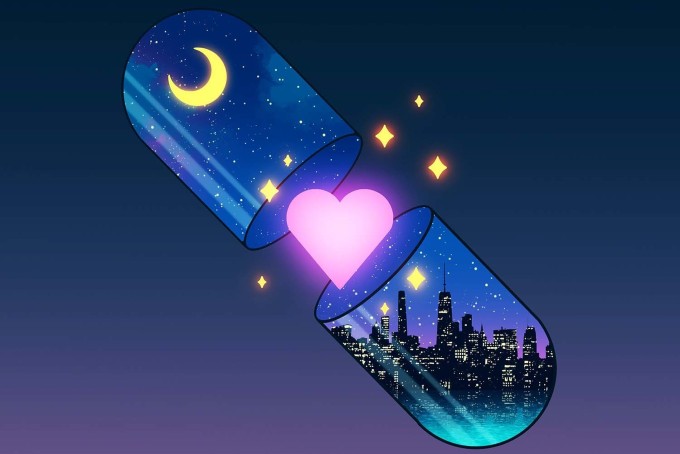 With The Vaccines’ newest record, Back in Love City, the indie-rock group introduces everyone to “Love City”: the fictional world that the album takes place in. Throughout the 13 tracks, one journeys through a universe built between dystopia and utopia— a melting pot of emotions that intensifies the need for human connection and well… love. This creates The Vaccines’ most immersive and, perhaps, the heaviest project to date.

The title track booms as the opener with ABBA-like glimmer, making one feel as though they’re a tourist in this very real town of Love City, pointing fingers out at the cityscape and paying for slushies during a quick gas stop. Although the lead single, “Headphones Baby,” is textbook commercialized pop, its enjoyable albeit cheesy pokes at the fourth wall aren’t representative of the record further. Instead, the listener is met with a heavier soundscape with electrifying riffs in tracks like “Wanderlust” and “Peoples Republic of Desire” that explode on impact. This is only amplified by the frenzied peaks of “XCT” that will have anyone feeling like they’re crawling out of their skin in the best way possible. “Savage,” though, is a personal favorite as its fantastically bizarre soundscape molds itself into a marvelous glam-rock sensation that teeters on the best of The Vaccines’ career.

There are still familiar patterns in Back in Love City that will satisfy long-time Vaccines fans. “Alone Star” features a foundational Vaccines chorus elevated by mariachi guitars while the ever-western tone of “Paranormal Romance” is an instant tune. Then, of course, there are slower-paced songs that give the record its emotional layers. “Heart Land” is a warm and fuzzy track that narrates the band’s love for America. It unfolds through the eyes of naivety— giving a tour of the US and which parts act like comforting icons to the storyteller (such as favorite bands and Spider-Man). “El Paso” is as fragile and breezy as the mirth of a summer sunset. Simply produced with a solo guitar, Young’s crooning vocals, and a steady drumbeat, the song is a standout for how evenly it stands against the rest of the project.

The Vaccines’ Back in Love City closes with “Pink Water Pistols” which act as the flight ticket home from this live wire landscape one’s been visiting for the last 12 tracks. Its hazy and atmospheric tone perfectly captures the come down from the high that was Love City. This leaves one chattering with excitement to book a trip back to the illustrious destination as soon as possible. To close out an album and immediately want to spin it again is no easy feat for an artist to execute, yet The Vaccines did. And if anything, it proves that in 2021 this band isn’t simply burning— they’re reigniting their flame.