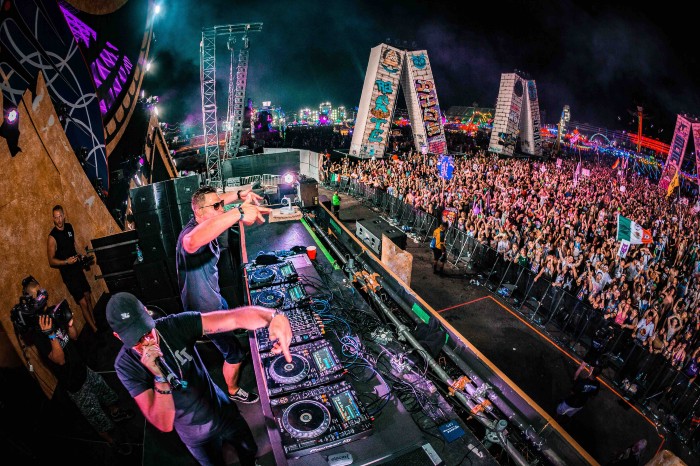 It’s official, the biggest hits of the 2010s have reached “throwback” status.

This month, “Call Me Maybe” by Carly Rae Jepsen celebrated its 10-year anniversary, and I still haven’t been able to get that hook out of my head. While the heyday of artists like Ke$ha, Katy Perry, and LMFAO may not seem that long ago, the musical landscape has had a monumental shift in the past decade. Gone are the days of endless club bangers and EDM hits. Today’s sound is much darker, moodier. Even the world’s biggest pop stars like Billie Ellish and Olivia Rodrigo have a much more stripped-back sound compared to the upbeat, electro-synth sounds of the 2010s.

The theatrical, unapologetic hedonism of the early 2010s was full of bombastic dance songs about living in the moment and celebrating tonight. Music was throwing out every feeling and sound at once because, to quote Pitbull, “We might not see tomorrow.” Yet, as the years moved on, this tone of optimism and celebration started to wear thin, and suddenly people were tired of being told to put their hands up and forget their worries. A few years later, we’d see the rise of alt-pop stars like Lorde and Lana del Rey that have had an extreme influence on the popular music trends of today. 2011 is a particularly interesting year that may mark the starting point of where this shift began. Amid the dubstep explosion and self-empowerment anthems, some of the top songs of the year were indie hits from largely unknown artists like Gotye, fun. and of course, the sudden cultural dominance of Adele with 21.

While there are obviously still major album drops and iconic musical moments happening in the 2020s, it seems like somehow the previous era of music was just bigger, both in sound and in impact. Before the streaming era, music spread mainly through radio stations, TV channels, college parties. These hits were unavoidable in the public conscious, and even the most hipster among us was at least vaguely familiar with the major songs through the power of the ripple effect.

However, services like Spotify and Apple Music have basically ended this music monoculture by giving individuals more control over what they listen to and endless options to choose from. Today, we’re able to seek out and discover lesser-known genres and artists from around the world and build playlists curated to their exact tastes. Obviously, new superstars like Dua Lipa and Little Nas X are still creating cultural moments, but they somehow don’t create that same dominance across every demographic.

Yet the biggest impact I feel that the 2011 music scene has left on the current landscape is the creation of the viral music megastar. On February 10, 2011, history was changed forever when 13-year-old Rebecca Black released her music video single “Friday” on YouTube. Immediately, the song gained millions of views and huge amounts of media attention for what today we would definitely describe as “cringe.” While mocked mercilessly at the time, “Friday” has been covered by everyone from Stephen Colbert to the Jonas Brothers to the cast of Glee. Rebecca even did her own re-mixed version this year!

The transformation from internet meme to widespread hit was repeated in 2012 with “The Harlem Shake” and 2013 with “Gangnam Style.” Now in 2021, this trend has kicked into overdrive. Instead of one fluke viral hit a year, many of today’s biggest artists like Megan Thee Stallion and Doja Cat first blew up through having popular songs on TikTok. Even established stars like Drake and Justin Beiber admit to tailoring their songs to suit the TikTok format rather than the reverse. These songs burn bright and fast, with a new #1 hit appearing every week rather than the same few artists dominating the charts the entire year.

In honor of those juggernauts that we’ll never forget, let’s look at some of the top songs that we’re released back in 2011.