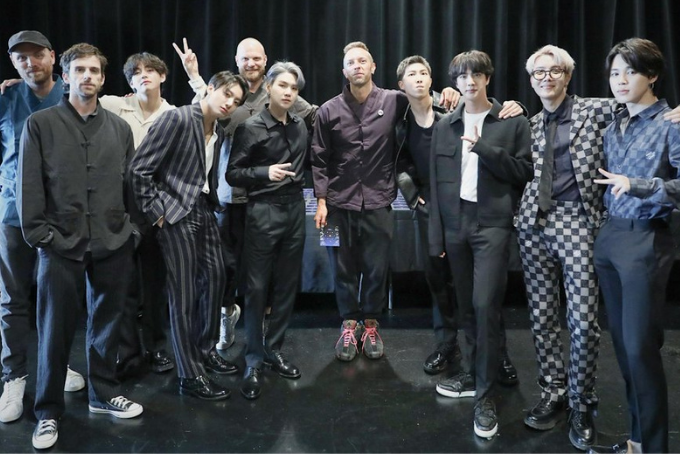 Last Friday, Coldplay released their new song “My Universe,” and they worked with no other than BTS. The upbeat, feel-good track follows Coldplay’s June release “Higher Power,” and it will be part of the band’s upcoming album Music Of The Spheres, which comes out on October 15.

Coldplay’s frontman, Chris Martin, was a guest in The Kelly Clarkson Show, and he stated that “My Universe” is “about someone being told they can’t love a certain other person or can’t be with this race, or they can’t be gay, whatever it might be. And we thought it would be good to sing this with BTS because maybe we’re not supposed to be together. And it turned out to be one of the most fun things ever. I went to Korea to be with them, it’s been amazing.” The singer also played an acoustic rendition of the song, and he even sang the verses in Korean.

BTS member, Jin shared some photos of him with Chris. Jin shared that Chris gifted him his guitar and that he will “keep it as a family treasure.” Similarly, BTS shared a video of RM and Chris recording part of the song.

was so much fun… pic.twitter.com/vVFUdluGDO

The uplifting love song is the perfect combination of Coldplay’s and BTS’ sound, making it appropriate for the charts, and it will also be a great addition to your playlist. Overall, “My Universe” is a great track that brought together two of the biggest acts in the music industry, and fans couldn’t be happier. Definitely, this collaboration will be one for the ages. We can’t wait to watch both bands perform this song live!

You can watch the colorful lyric video for “My Universe” below and remember to support Coldplay and BTS by streaming the song on Spotify and Apple Music.