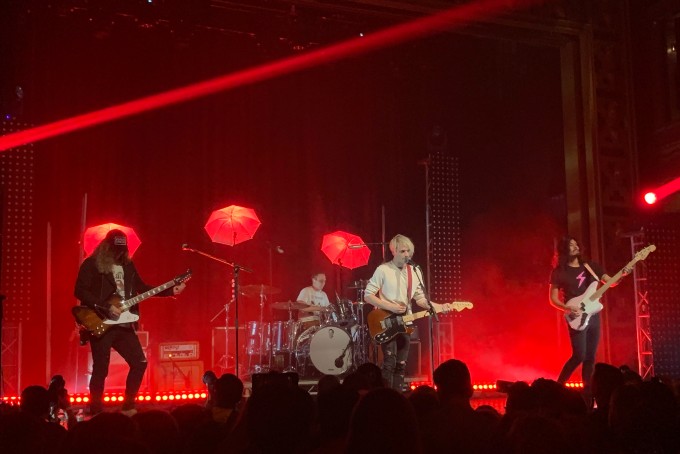 Sure, music can stir up emotions, but Badflower has found a way to make fans feel everything at once. And when that music is live, those feelings are even stronger. I was blessed to attend the Webster Hall show on the LA band’s This Is How The World Ends tour. The tour is aptly named after their album that released a few hours after the NYC show. And yes, I’m still in shock with how the band manages to bring stories to life through music. With high energy in the atmosphere mixed with fun stage lighting, this Badflower show was nothing short of an immersive experience.

Starting with two newer singles “Fuckboi” and “Don’t Hate Me,” Josh, Alex, Joey, and Anthony quickly reeled the crowd in. Fans of all ages are bouncing, as for many, it’s their first show back. The boys provide a welcoming environment and you can tell they’re just as excited to show us their new songs as we are to hear them. The crowd goes wild with 2 more upbeat bangers “Johnny Wants to Fight” and “30”. The mood shifts as the audience gets to hear softer songs “Only Love” and “Tethered” for the first time. Singer, Josh’s knack for story telling is only greater in person.

Next, Badflower has everyone scream-singing the words back to some of their classics from their first album. With the colorful lighting and infectious energy, it was hard not to smile. We could see the band beaming back at us too. Despite the rough year without live music, we were ready to be back and dancing with strangers. The show rounded out with a mix of new songs and fan favorites. For the encore, they closed with the hauntingly beautiful new song “Funeral.” If you need to feel every emotion at once, take a listen.

With the new material, Badflower dove deep into topics others often shy away from. This Is How The World Ends covers everything from politics, mental health, stalkers, cheating, abuse and more. Sure, at times it’s dark, but the way the stories come together is a powerful piece of art. So, if it wasn’t obvious, Badflower’s tour is one you can’t miss and their new album deserves some repeat listens. Also, check out the openers Dead Poet Society and Teenage Wrist who kicked off the rock show strong. Until next time, see you in the pit!