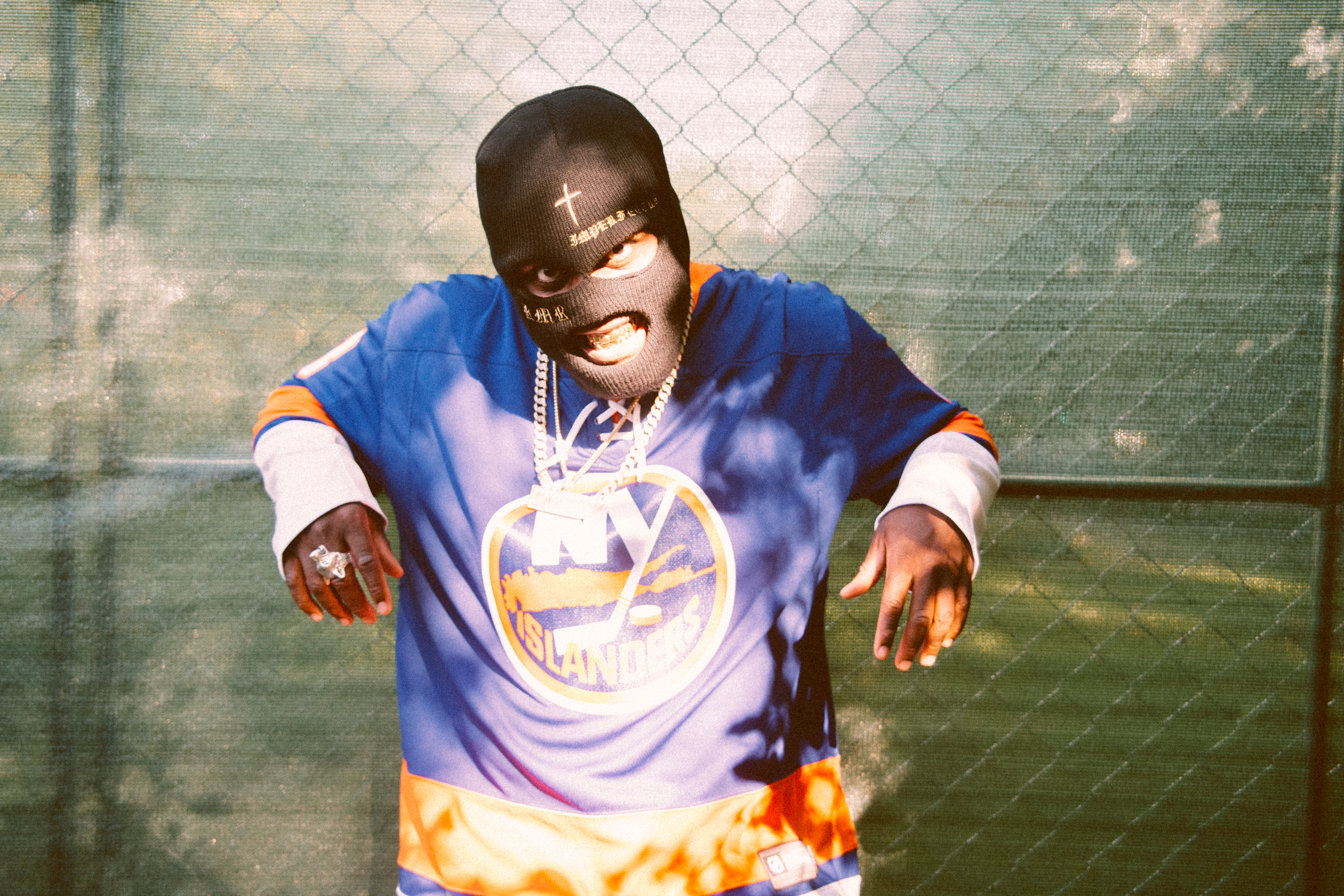 Meet RMR – pronounced Rumor – a 20-something year old rapper who is changing up the game by bringing country roots and alternative sounds to his music. Hearing “Rascal” for the first time, which is an interpolated version of Rascal Flatts‘ “Bless the Broken Road,” we instantly needed to hear more. Something about RMR is so unique and drags you in. Music aside, the man behind the music is mysterious. Upon first glance, RMR is wearing a decked out ski mask with grills, and all you can see is his big, bold eyes. With this catchy music and peculiar look, there’s no way you can ignore him.

Fortunately, RMR was at The Governors Ball Music Festival in NYC this past weekend and I had the chance to pick his brain, all while Billie Eilish interrupts. Walking up to RMR, he greets you with a big smile – with grills in, of course – and immediately introduces himself and asks for your name. You can tell he wants to talk to you and isn’t being forced into doing generic press.

RMR’s music is different than what is going around in hip hop right now. It sounds as if he starts off with a hip rap base blended with country twang. “My sound is well-rounded. It’s the sound of the world [laughs]. I make music from inspiration and that – whoa Billie Eilish is on [crowd screaming], that’s a crowd!” He continues, “different walks of life and different scenarios, that I, myself, have been through and others have also been through, that I’ve witnessed.”

With his sound being diverse, that also brings a broad list of inspirations. When asked about what and who inspires this, RMR said, “Everyone! Everyone inspires me. Every artist thats had a footprint in this century has inspired me. I listen to a whole variety of different things, so that inspires me.”

The eclectic rapped released his debut EP Drug Dealing is a Lost Art in the beginning of summer 2020 and has released numerous singles since, but he isn’t done anytime soon. His debut album will be out sometime in the 4th quarter. RMR felt eager to share the current publicly unknown title of the album but held back. He assured us though, a single will be dropping pretty soon. He’s collaborated with so many artists, such as Future, Tyla Yaweh and Young Thug, so we’re excited to see who will be on his album. In the meantime, RMR’s wishlist consists of Michael Jackson and Michael Jackson only.

Considering RMR went viral overnight right when the pandemic began, the must-ask question was – what has it actually been like on his end? To blow up, while being stuck inside, is an interesting and unusual way to make it in the industry. “Oh ya know, besides the pandemic, and people being sick and dying, that’s obviously not good. I feel like the world has changed, and maybe it has changed for the better. Maybe, you know, obviously this is headed in a certain direction where it’s safer for us and we’ll see what that is. As an artist, there’s more thinking. There’s more sitting down. A lot of people, I feel like, got to know who they were, ya know, and it wasn’t in such a rush. It’s great.”

You might not know RMR yet, but you’re about to. With country rap becoming more prevalent, RMR will be at the forefront of it all. Aside from his long-overdue debut album, he has a lot up next. “I want to tour. I want to see the world. I want to see all the Rascals out there – fanbase. I want to see things I’ve never seen. I want to grow. I want to change, ya know. I want growth.” It’s never too late to become a Rascal.