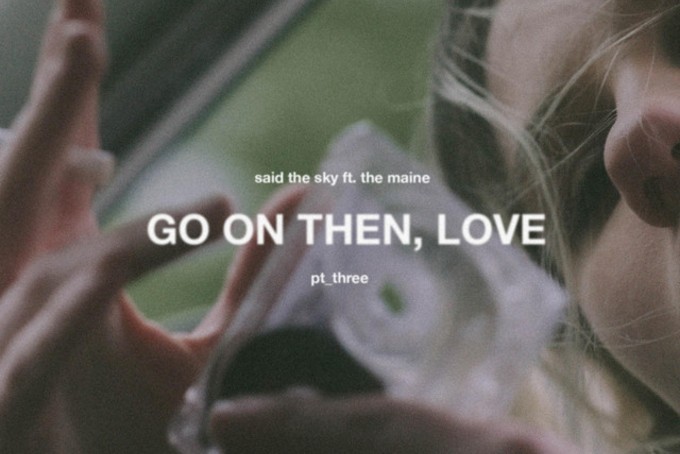 With the pop punk and emo revival, it only makes sense that they’re bringing alternative artists in for EDM collabs. And Said The Sky is no stranger to cool collabs having worked with Illenium, Missio, and Olivver the Kid. Now, the Colorado DJ dropped “Go On Then, Love” featuring The Maine. The Phoenix emo group has transitioned into more of an alternative rock group in recent years. Their growth and newer sound meshes well with Said The Sky’s beautiful melodies and harmonic baselines.

“Go On Then, Love” is an ethereal track about falling in love and being unapologetically yourself. However, the music video takes a twist on it showing a girl cheating on her boyfriend with his best friend. Whatever the interpretation is though, it’s magical and full of emotion. The track see the best of both artists combining the feeling of The Maine’s Lovely Little Lonely album and Said The Sky’s newer work such as “Treading Water.”

Instrumentally, the track has all of the best elements of a Said The Sky and a The Maine song. It has sweeping guitars blended with melodic production. On top of that, John O’Callaghan’s vocals are soothing and draw any listener in. Everyone on the collaboration has a knack for storytelling through music and “Go On Then, Love” only further highlights their talents.

So yes, we want to keep seeing our favorite pop punk artists collaborate with today’s DJs. It’s incredibly cool to see EDM artists like Cheat Codes, Kayzo, and Sullivan King put out tracks with rock artists. DJs grew up on a lot of the same music us kids listening to Fall Out Boy in middle school did. And now, that 2000s emo influence is popping up on a lot of songs today and we’re here for it. Also, we wouldn’t say no to seeing The Maine at a rave. Until then, “Go On Then, Love” will be playing in our day dreams.