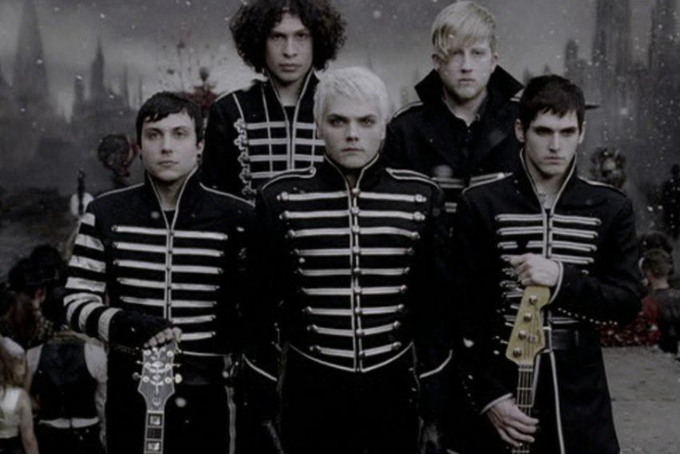 Whether you were a fan from the get-go, or you discovered the band years later, My Chemical Romance’s album The Black Parade surely played a big part in your life. This Saturday, the iconic masterpiece turns 15 years old. In 2006, and with hits such as “Teenagers” and the fan-favorite “Welcome to the Black Parade,” MCR created an unprecedented album in both their discography and the music scene in general.

The concept album is full of deep lyrics, interesting characters, and amazing visuals. The band drew inspiration from many of the greatest acts in music history to create their own rock opera. David Bowie’s influence is very prominent in “The End.” which is reminiscent of the British singer’s classic “Five Years.” Also, Ray Toro’s solo in “Welcome to the Black Parade” has been compared to the work of Queen’s very own Brian May, who even performed on stage with MCR in 2011. Production-wise, The Black Parade is above your average record. The band collaborated with Rob Cavallo to create the album because they were impressed by his work on Jawbreaker’s Dear You, a record that largely inspired MCR’s 2004 album Three Cheers for Sweet Revenge.

Telling the story of a terminal cancer patient, the songs in The Black Parade are well-crafted and extraordinary. The flamboyance in “Mama” makes it one of the best songs ever written, and the participation of Liza Minnelli takes the song to a whole new level. In the case of “Cancer,” the band truly captured the sorrow that cancer patients have to go through both physically and mentally. The hidden song “Blood” is as theatrical as it gets, and it is a perfect closing track for the record. MCR also got to experiment with crazy sounds, one prime example being the giant tuba on the bridge of “Dead!” which was guitarist Frank Iero’s idea. Even the B-side “Kill All Your Friends” is a gem that, in frontman Gerard Way’s words, deserved to be on the album, and we couldn’t agree more.

Last word on BP. "Kill All Your Friends" should have been on the album. Onwards…

Of course, the extravaganza of The Black Parade includes not only the songs but also the aesthetic. Gerard contacted costume designer and Academy Award-winner Colleen Atwood, known for her work with film director Tim Burton, to create the iconic The Black Parade marching uniforms. According to Tom Bryant, author of the biography The True Lives of My Chemical Romance, Gerard “would check in with Atwood every day, forming such a close relationship with the designer that he would come to say that she was like a big sister to him. When she had finally made the outfits, he was breathless with excitement at trying them on.” The costumes, which resemble The Beatles’ outfits for their album Sgt. Pepper’s Lonely Hearts Club Band, became a staple of the band.

Very few bands would go to extreme lengths to create an album, but My Chemical Romance went all-out when creating The Black Parade. The band decided to record the album in The Paramour Mansion in Los Angeles, a 22,000 square foot haunted mansion. It is said that oil-heiress Daisy Canfield-Danziger haunts the halls of the place after dying when her car plunged into a canyon from Mulholland Drive. The mansion has also been used as a school for girls, a convent for Franciscan nuns, and it served as a filming location for the seventh installment in the Halloween franchise, H20: 20 Years Later. The atmosphere of the mansion helped to create the fantastic The Black Parade tracklist, but it also took a toll on the band members’ health. Gerard stated that “it was a dark time […] At times it felt like the record was trying to kill us.”

In “Sleep,” Gerard describes the terrors he experienced in the mansion. The song includes voice recordings of Gerard explaining that “it feels like as if somebody was gripping my throat and squeezing” and “sometimes I see people that I love dying.” The way Gerard’s voice is recorded reminds the listeners of psychiatrists listening to their patients’ testimonies. Likewise, bassist Mikey Way fell into a deep depression during his stay in the mansion. He described the experience by stating, “we had to get out of that house by the end of it. That place was just a storm cloud in the shape of a house. The sun never penetrated that property.” Moreover, Cavallo says that “the demo tapes are really crazy to listen to […] You can almost hear the haunted house in the background. You can almost see the ghosts flying around the room when we recorded those songs. Especially that ‘Mama’ song.”

Definitely, My Chemical Romance’s dedication to creating The Black Parade is only one of the many reasons why people love this album. Just like all of MCR’s catalog, The Black Parade made millions of fans feel less alone, and it gave them the courage to keep on living even if that means walking this world alone. The theatrical nature of the album is what makes it so appealing to the audience and what made it garner so much well-deserved praise from the critics, but the self-exploratory lyricism is what makes The Black Parade an authentic piece of work that should never go unnoticed.

It’s no secret that the music scene was truly affected when My Chemical Romance broke up. Luckily, they came back, and even though the COVID-19 pandemic has ruined many of their projects, we can almost guarantee that we will hear more MCR for years to come, and if that’s not the case, we can rest assured that we will have The Black Parade forever.

One thought on “The Black Parade Is Not Dead: 15 Years of My Chemical Romance’s Groundbreaking Album”