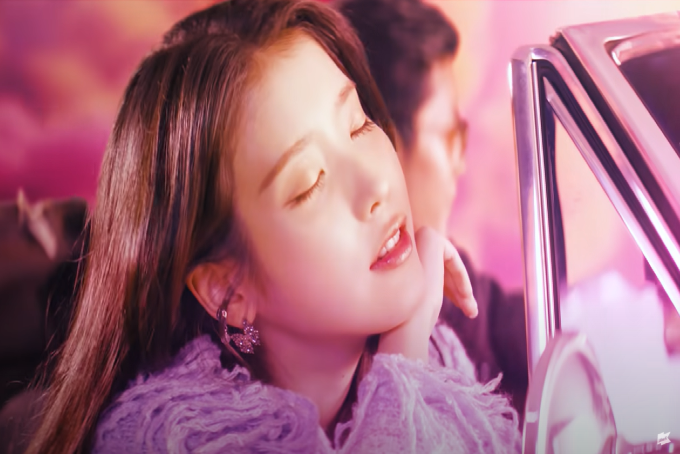 IU has graced fans with new music since releasing her fifth studio album LILAC earlier this year. The songstress dropped her newest single titled “Strawberry Moon” on October 19 at midnight KST and it has already topped domestic music charts in South Korea. The track is written and composed by IU with producer Lee Jong Hoon.

In a description accompanying the song, IU explained the track’s meaning. “The things that happen inside of me when I fall in love are closer to an unbelievable fantasy than the strawberry-colored moon in the night sky in June that looks like it was made with Photoshop. Even if you don’t come here often, even if you don’t come back, I want you to remember that mysterious moment that everyone has experienced at least once while listening to this song.” She goes on to say that the track was originally intended to just be her vocals accompanied by an acoustic guitar and piano, but the addition of electronic elements gave the song more of the dreamy and spacey vibe she wanted.

“Dreamy” is a perfect way to describe this enchanting track. IU’s vocals continue to impress as she effortlessly traverses notes across her vocal range. “It’s a once in a lifetime kind of luck / My heartbeat resonates through my body / Oh, I would gladly be lost in the night / If only I can be lost with you,” IU delivers in the second verse with a gentle conviction. IU’s skills as both a vocalist and a lyricist are on full display throughout the track, always fresh and not afraid to explore different sounds than her previous releases.

As the singer mentioned in the song description, the addition of bright electronic beats definitely elevates the track and gives it a fantastical vibe to fit with the lyrics. In many ways, the track itself mimics IU’s delivery in the track; being more subtle in the verses, before bursting with power in the chorus while not overwhelming her voice.