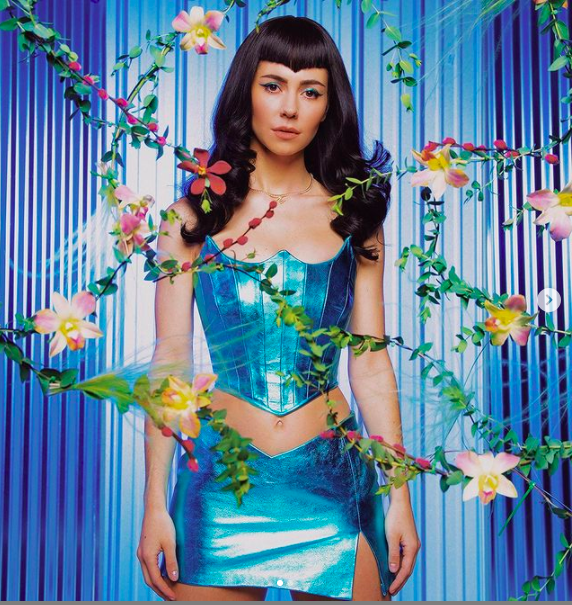 This week MARINA — formerly Marina and the Diamonds — released a new remix of her song “I Love You But I Love Me More” featuring an original verse by Chicago indie band, Beach Bunny. The original track was on Marina’s fifth solo album, Ancient Dreams in a Modern Land, which came out this past August.

Following up the generally underwhelming LOVE + FEAR album, Ancient Dreams was a return to a much more theatrical Marina. The bold sounds and lyrics focused mainly on political injustice along with Marina’s own anger/heartbreak about a recent breakup; two topics that Beach Bunny is also incredibly familiar with. While MARINA’s bombastic pop style may seem wildly different from Beach Bunny’s more mellow rock approach, the matchup works unexpectedly well.

In the solo version of the song Marina backtracks on her self-confidence in verse two, admitting that “men and women love differently.” She uses this space to say that perhaps both she and her ex-lover messed up. Beach Bunny rejects straight up rejects this.

Lili Trifilio, Beach Bunny’s lead singer, doubles down on the girl power message, chiding the other person for giving her anxiety and making her think she was the problem; when in fact she was better off without him. The combination of both voices works to transform the song into more of a celebration of female friendship and support, ending on a more positive tone that fits perfectly with the other feminist-themed tracks on Marina’s original album like “Purge the Poison” and “Venus Fly Trap.”

The collaboration was also a special occasion to Beach Bunny themselves tweeting “Thank you to @MarinaDiamandis for having me on the remix, it’s such a privilege and an honor to work with the artist that’s inspired me the most.”

I Love You But I Love Me More feat. you’re truly is out everywhere now! Thank you to @MarinaDiamandis for having me on the remix, it’s such a privilege and an honor to work with the artist that’s inspired me the most 💕 https://t.co/IOuVg2VL4B pic.twitter.com/t4uS7i43RL

The “I Love You But I Love Me More (feat. Beach Bunny)” remix will be included on an upcoming deluxe album version of Ancient Dreams in a Modern Land that’s planned to drop later this year.