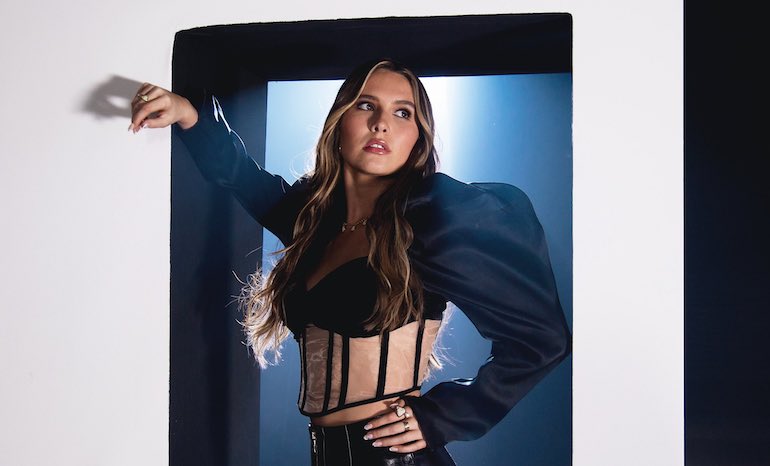 On her debut EP, Mimi Webb shows off her impressive vocals and her ability to mold heartbreak into a strong hook that will keep you coming back. The EP is titled Seven Shades of Heartbreak. Over the course of seven tracks, Webb blends aching piano ballads with different levels of upbeat pop production to create an enticing collection of songs.

Mimi Webb is a UK-based singer-songwriter who started writing songs when she was just 13 years old. She found her way into the industry by toplining on a track that made its way onto Spotify. It caught the attention of the right people and she signed with Epic Records at just 18. Now 21, Webb has crafted a strong debut to define her own sound for audiences.

That sound is full of background choruses, midtempo ballads lifted with spacious drums and emotional and catchy hooks. Her voice is warm and soulful. It leans a little jazzy, with that slight rasp that feels ready to crack any second but as she demonstrates with her impressive range, it’s fully under her control. She claims Amy Winehouse and Emelie Sandé as influences, and I would add Julia Michaels and Bea Miller to her list of contemporaries.

Her biggest song to date is “Good Without,” which lands near the end of the EP. The track is an emotional self-reckoning. The verses track the messy, doubtful feelings that circle your head after someone breaks up with you. She sings about how she feels so much worse seeing that they’ve moved on over a pulsing piano and a clicking guitar.

The chorus is where she realizes how unbalanced the relationship was, how she was not given what she’s worth. She decides she is better off over a moving chorus of voices. The production builds itself throughout, much like her resolve to move on from this relationship, adding in different layers of rousing drum tracks. It transcends from an aching ballad to anthemic. The song landed Mimi Webb her first UK top ten and has racked up over 100 million streams.

This track shows Webb’s ability to capture complex and competing emotions within one song. She’s willing to be so vulnerable and emotionally open with the listener and isn’t simplifying the story down to satisfy a simple hook. This skill is what makes the EP so interesting. Break up songs are all too common, but this is a collection full of standouts.

Seven Shades of Heartbreak is full of varied stances on, or rather shades of, break ups. Webb positions herself as both the instigator and the one left behind, caught in the emotions and never really in love, stuck and moving on.

“Heavenly” is a track that demonstrates that break ups can actually feel good. Over a laid back drum beat and glossed out in reverb, Webb examines how something she’s been dreading has ultimately been freeing. It’s a raw revelation packaged as a slinking, sensuous pop confection.

The most upbeat track on the EP is “Little Bit Louder.” It’s a song about realizing you haven’t been giving a partner your all because you’re afraid to be that vulnerable. Again a complex emotional subject that Webb fits into straightforward lyrics and lets loose over pumping drums.

Seven Shades of Heartbreak is a wonderful debut from a young artist. It has a strong concept and a consistent sound that will draw you in and lyrics that will keep you listening. Mimi Webb has made heartbreak sound pretty good.