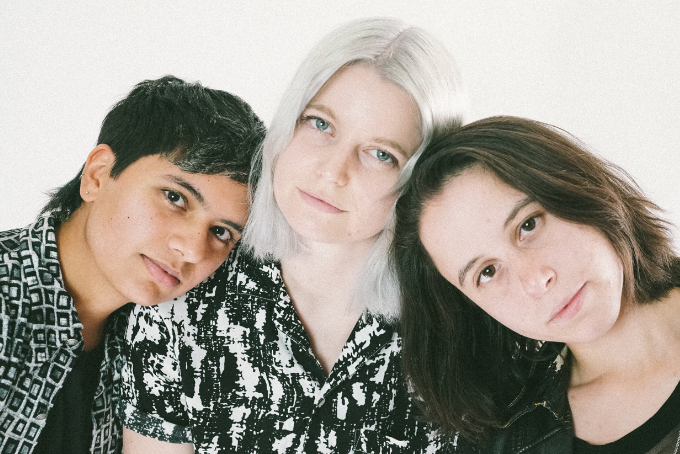 On October 12, Gypsum released their self-titled debut album, which includes the single “Give It.” Gypsum contains 10 tracks, and each one is a unique experience. One of the most outstanding songs in the album is “Snow White,” in which the mysterious vibe will hook the listeners right away.

According to a press release, Gypsum named their band after a field trip to the L.A. Natural History Museum, where they learned about the mineral. Taking inspiration from jazz and punk acts, the members view the band as a “science experiment.” The three members’ personalities blend really well and result in incredible music.

We had the opportunity to interview Gypsum’s guitarists and vocalists Sapphire Jewell and Anna Arboles. They talked about their debut album and also offered some advice to future musicians. Check it out below!

How do you feel about the release of Gypsum?

Sapphire: Extremely excited! I know so many people who have been waiting to get their hands on a Gypsum record and I’m happy the time has finally come. There is also a sense of relief; it’s been a long process, and it’ll be nice to cross the finish line and release it.

What or who were the main inspirations for the songs?

Sapphire: Each song evolves in its own way that is usually unique from the rest. I think our inspirations mostly come from what we’re interested in at the moment, or what’s been on someone’s mind most recently. Everyone brings in ideas to write songs around, whether it be a whole song or just a small piece of one. Sometimes we also jam and see if we can write a song from whatever comes out. The inspiration is different almost every time a new song starts.

What are your expectations regarding the audience’s reactions to the album?

Sapphire: Naturally, we hope they love it, and we hope it finds its way to more people who will love it.

What is each member’s favorite song in the album?

Sapphire: Mine changes monthly, but, right now, I really love “Margaret.” Other times, I’ll say my favorite is “Gull Lake.”

For Gypsum, did you write only the 10 songs on it, or did you have to discard some tracks?

Sapphire: We had one other song that was in the running, but it wasn’t finished yet, and it didn’t really feel like it belonged to this album, so we’re saving it for later.

Anna: Yeah, we tend to be pretty precise about our songs. I think we do a lot of self-editing during the writing process, so we showed up to the studio with exactly what we wanted and needed.

“Disappear” is 6 minutes long, which is a bold choice since, nowadays, musicians tend to write songs that run shorter than 5 minutes. What made you include this song in the album?

Sapphire: Simply because we love it and love performing it. We’re not out here trying to make songs that are particularly “marketable.” We just want to make the music we’d like to hear.

Anna: We’re not really trying to have songs clock in at 3:30 every time. Yeah, six minutes I think is just how long it took for us to say what we needed to say. It doesn’t feel long to me because I don’t think there’s any excess. We are very intentional and specific and often talk at length about how long or short something like a reverb decay needs to be, and “Disappear” is no exception. It also has a very comforting texture sonically, so it feels nice to live in it for a while. Technicalities aside, it’s simply a song that we love and have been playing for a long time. The record would not be complete without it.

Which song was the easiest to write and which one was the hardest?

Anna: I wouldn’t necessarily describe any of our songs as “easier” or “harder” to write. They all kind of enter the world differently, so it’s hard to compare. I will say that I often use this band as an opportunity to try something new, whether it’s a guitar technique, production technique, or a certain songwriting inspiration. So every song, at least for me, did have a unique little challenge to overcome.

Was there any conflict or disagreement regarding the production of the songs? How do you as a band cope with those disagreements?

Sapphire: I think, generally, we agreed on a lot. There would be the occasional disagreement through the mixing phase, but we would try to make sure everyone felt heard, accommodated (if possible), and then vote if need be. Since there are currently three of us voting, it made things easier, but we still like to make things unanimous whenever we can.

Is there any piece of advice you’d like to give to aspiring musicians?

Anna: Just write whatever you want to write. There’s always the opportunity to write another song if that last one doesn’t work out. Play the long game.

Gypsum is out now, and you can listen to it on Spotify and Apple Music. You can also watch the lyric video for “Give It” below. Happy listening!