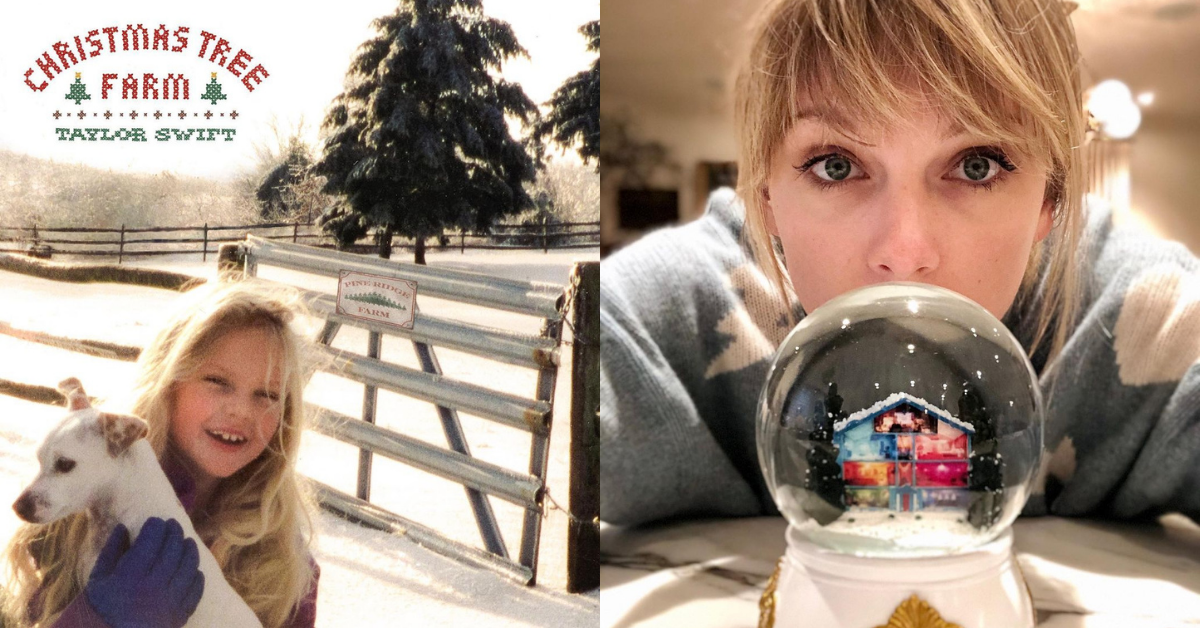 Today is Taylor Swift’s 32nd birthday! Born on December 13, 1989, Taylor was raised on a Christmas tree farm, so the holiday spirit is pretty much in her blood. To celebrate, let’s listen to five Taylor Swift tracks that are either inspired by the holiday season or just have that wintry, cozy feeling that December brings.

Taylor has always loved Christmas. Mainly because she lived a very happy life on her family’s Christmas tree farm. Released two years ago, “Christmas Tree Farm” describes the fun Taylor had while living on the farm and how thinking about that place makes her feel better when facing difficult times. She also mentions Christmas traditions like holiday shopping, kissing under the mistletoe, and drinking cider. Moreover, Taylor compares her partner’s love to the happiness she felt at the farm.

The music video for “Christmas Tree Farm” is comprised of home videos of Taylor’s childhood. In 2018, Taylor returned to her hometown of Reading, Pennsylvania, and visited her childhood house. Swift posted a photo posing in front of a barn she used to play in and one where she’s sitting on the floor of her childhood bedroom with her friends Martha Hunt, Este Haim, Kennedy Rayé Black, and Ashley Avignone. Overall, “Christmas Tree Farm” is a joyful Christmas song, and it is definitely a must in all holiday playlists.

Out of Taylor’s 2019 album Lover, “It’s Nice To Have A Friend” tells the story of two friends from childhood who end up getting married. The steel drums, which are often used in Caribbean Christmas songs, and the choral backing vocals give the song a holiday feeling. The lyrics also reference some Christmas elements such as snow and gloves.

“It’s Nice To Have A Friend” includes a sample played and sung by students in the youth choir from the Regent Park School of Music. Based in Toronto, the school’s mission is to help “Toronto youth, facing financial and other barriers, to thrive through high-quality music education,” according to their website. Producer Frank Dukes confirmed that royalties from the use of the sample will help to fund the school’s curriculum.

Last Saturday marked evermore’s first anniversary. When Taylor announced the album, she dedicated it to people who would spend the 2020 holiday season missing their loved ones. Many songs on the album have a touch of nostalgia in them, especially “’tis the damn season.” Swift wrote that this track is about Dorothea, the eponymous character in another evermore track, and “what happens when she comes back [from Hollywood] for the holidays and rediscovers an old flame.”

I also know this holiday season will be a lonely one for most of us and if there are any of you out there who turn to music to cope with missing loved ones the way I do, this is for you.

“’tis the damn season” truly captures the feeling of going back to your hometown for the holidays; being excited to see your family again but also longing for the old days. The lyrics “I parked my car right between the Methodist and the school that used to be ours / The holidays linger like bad perfume; you can run but only so far” reflect how Dorothea feels about her past relationship and the flashbacks she gets whenever she comes back. All in all, “’tis the damn season” is the perfect track for a wistful holiday playlist.

It’s winter, which means you’d have to be wearing cozy clothes whenever you go out. What could be more perfect than a cardigan — and, of course, a red scarf —?

When talking about folklore, Taylor has stated that “there’s a collection of three songs I refer to as The Teenage Love Triangle. These three songs explore a love triangle from all three people’s perspectives at different times in their lives.” In the case of “cardigan,” we hear Betty’s perspective. Although the track is not a Christmas song, the somber ballad gives the listener a sense of longing, which many people feel during the holiday season.

One of the downsides of the holiday season is missing people who are no longer with us. Co-written with Mark Foster, “Forever Winter” is rumored to be about one of Taylor’s friends who died in 2010, the same week she released Speak Now. Swift won a BMI award for Country Songwriter of the Year. During her acceptance speech, she stated, “it’s been a really emotional week […] Yesterday, I sang at the funeral of one of my best friends, and he was 21, and I used to play my songs for him first, so I would like to thank Jeff Lang.”

Mainly, “Forever Winter” shows how people who have loved ones who are dealing with mental health issues feel. Even though they want to help their relative or friend out of their problems, nothing will be enough since their battles are within themselves. Nevertheless, Taylor reminds us that by only being there for our loved ones, we can support them to endure their circumstances, and if they’re not with us anymore, we can always hold on to the memories. Therefore, “Forever Winter” is a great song for the holidays when you’re feeling down because someone you loved is not here any longer.

One thought on “5 Happy, Sad, and Cozy Taylor Swift Tracks for the Holiday Season”