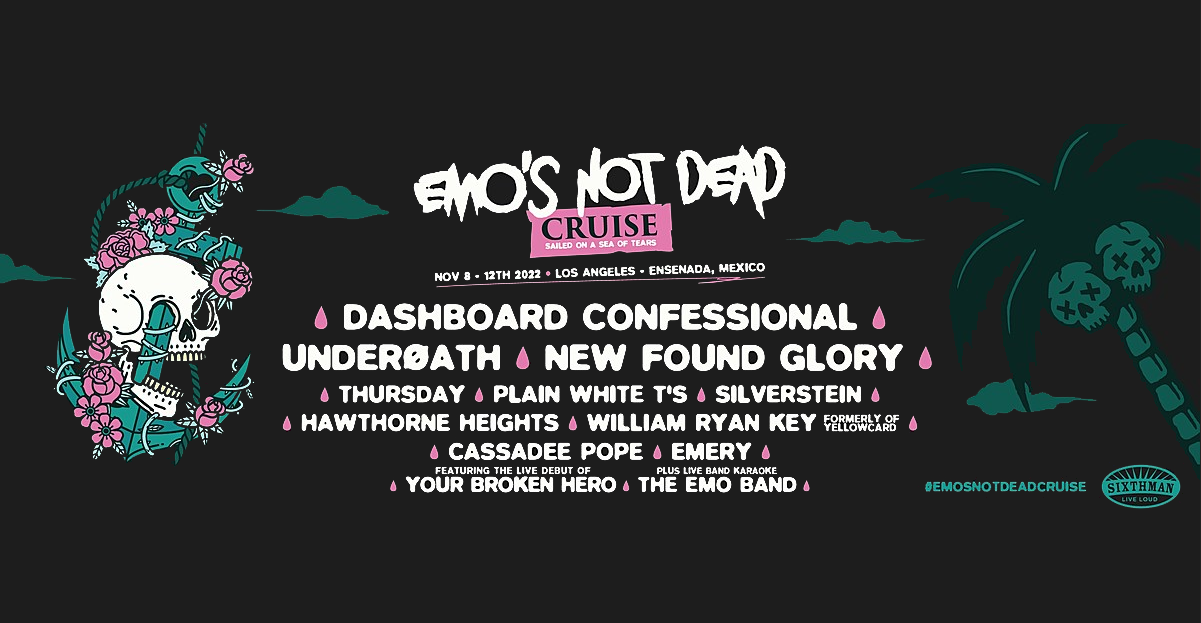 Emo music has been resuscitated from its late stage fade away with the announcement of the Emo’s Not Dead Cruise. Starring bands such as Dashboard Confessional, New Found Glory, and Cassadee Pope of Hey Monday. The cruise is set to relive pop punk’s heyday for a short weekend in November 2022.

The announcement comes shortly after the news of Las Vegas’ When We Were Young Fest breaking the internet. While the lineup for this sail away tour is not nearly as packed, there is some cross over. Namely in the headliner Dashboard Confessional, a quintessential emo band of the 2000s.

There’s many reasons emo has struck again. From the claims that a mainstream name like MGK has “revived pop punk” to the fact that late stage millennials are hitting a more financially stable stride with the postponement of student loans. However after the last two years of this pandemic, which largely and rightly prohibited gatherings like tour, it became apparent emo needed to get back on a stage.

To any punk fan, it’s no secret that the scene thrives off live shows. The pop punk and emo genres haven’t had the same mainstream radio play of pop since the 90s. With streaming taking precedent over sales, indie bands struggle to introduce themselves to new fans.

Furthermore, the punk scene has a rich history of festivals. The most famous being Vans Warped Tour. The skater shoe sponsored, cross country tour was a staple to anyone in the genre. It was a honorific for new bands to play and an introduction to the scene for many soon-to-be emos. The 2019 departure of Warped Tour left the scene with a vacuum, which we struggled to fill in the mist of an upcoming pandemic.

This being said, it’s not a surprise emo fans everywhere are being gifted with festivals, tours, and even cruises to fill the void. I expect there will be many new festival announcements gracing our timelines and taking our money. The tough part will be figuring out which one to go to.

In the case of Emo’s Not Dead, it’s another classic punk merchandiser sponsoring a festival of sorts. The cruise leaves from Los Angeles on November 8, 2022 and docks in Ensenada, Mexico on November 12, 2022. Over the course of five days, the audience can experience 12 different artists who staple the emo genre. Classic names like the Plain White T’s, Hawthrone Heights, and Silverstein make the lineup.

The company is advertising the cruise as ‘the greatest emo adventure of a lifetime’, while publishing videos such as the following.

The cheapest option for a single person on this four night cruise is $1,581 (not including food or drink). But if your bank account is already groaning, fear not, the cruise is sold out. You can join the wait list here.

In the mean time, what emo bands do you want to see make a comeback through these new festivals?