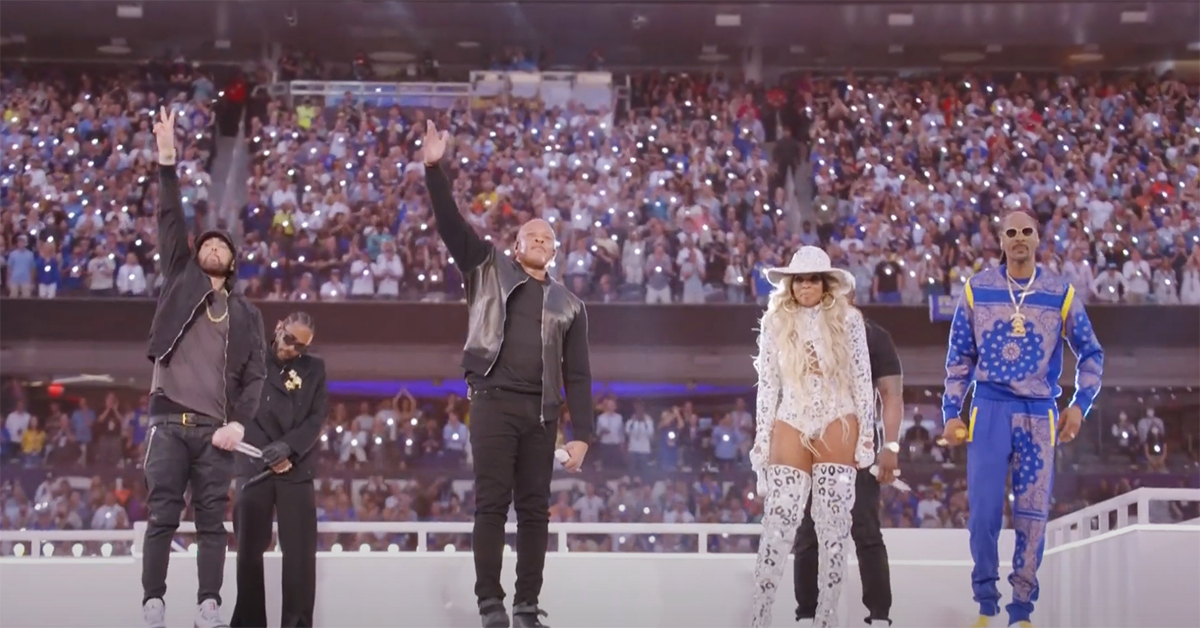 No fifteen minute period unites and captivates modern America quite like the Super Bowl Halftime show. The music, the memes, and the star power all coalesce into a bizarre fever dream that dominates Instagram feeds for weeks. This year’s Pepsi Super Bowl LVI Halftime Show was stacked with elements old and new, as 2022 marks the first rap centered halftime show. Mary J. Blige, Snoop Dogg, Dr. Dre, Eminem and Kendrick Lamar made up a monster lineup deserving of the major hype this performance has received in the media. NBC predicted this to be “the greatest halftime show of all time”, and a performance comprised of hit after hit after hit from the biggest names in rap and hip hop seems to prove them right.

Music’s biggest stage lit up Sunday evening with Dre and Snoop coming in red hot. They hit the ground sprinting with an infectious performance of “The Next Episode,” setting a high bar fro the rest of the evening. A surprise entrance from 50 cent, hanging upside down from the ceiling no less, somehow surpassed this energy from just moments into the show.

Mary J. Blige took the limelight in classy chrome thigh high boots and matching lace up leotard. Blige radiated power, power and more power as she belt out “No More Drama,” a soulful slow paced anthem that builds right back up and passed the stage to our next iconic performance.

Kendrick Lamar took the stage as only Kendrick can, dripping in swag from a cardboard box. Lamar dominated his performance of two gems in the crown of his discography, “m.A.A.d. city” and “Alright.” Just when the Super Bowl Halftime show became a Kendrick Lamar concert, a historic hook brought audiences back to earth.

Eminem’s “Lose Yourself” is easily on the Mount Rushmore of hip-hop songs, and this performance did not disappoint. Truly pulsating, Eminem captivated America as every audience and band member can be seen gleefully singing along. Notably of which is a surprise appearance of Anderson .Paak on the drums, donning an infectious smile.

The hype carried us home to yet another supreme song. “Still Dre” closed out the Pepsi Super Bowl LVI Halftime Show of 2022, leaving audiences in L.A. and at home reeling. Whether you rooted for the Bengals, the Rams, or the ad breaks, the real winners of Super Bowl LVI were the Halftime performers. From the dancers to the back bands to the absolute champions of hip hop, “historic” certainly describes this year’s Halftime Show.