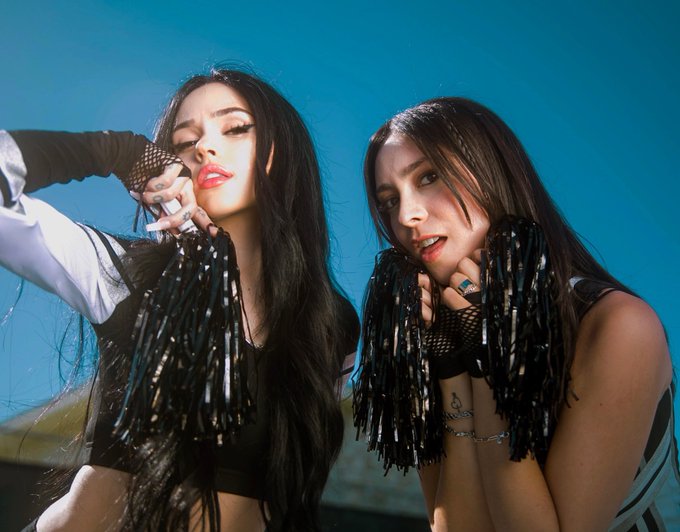 The early 2000s renaissance is still going strong, so it’s not surprising that one music trend has come back: Cheerleader Pop. From Avril Lavigne chanting, “Hey! Hey! You! You! I don’t like your girlfriend!” to Gwen Stefani teaching an entire generation how to spell B-A-N-A-N-A-S, tongue-in-cheek chants were all the rage in the noughties. This same upbeat energy is all over the new single “Debbie Downer” from alt-pop singers LØLØ and Maggie Lindemann.

Canadian singer-songwriter LØLØ joins forces with rising alt-pop star, Maggie Lindemann for an infectious girl power anthem. Lindemann has been slowly gaining a following since 2015 and toured with rising pop stars including Sabrina Carpenter and Madison Beer. “Debbie Downer” and its accompanying music video were released on February 10, 2022.

The song describes a girl who is far too busy dancing in moshpits and crashing house parties to care what anyone else thinks. It’s a song that would fit perfectly on the soundtrack of any teen flick. The video goes all-in on the high school motif with LØLØ embodying the typical outcast, stomping through the hallways in heavy black boots, cargo pants, and a mesh top. Meanwhile, Maggie plays the part of the totally over it Queen Bee, terrifying fellow students before teaming up with LØLØ to lead a gothic cheer squad out on the courtyard.

The concept is extremely similar to Olivia Rodrigo’s “Good 4 U,” another pop-punk cheerleader music video that blew up early last year. It’s not surprising more Gen Z artists are jumping on this trend, as they grew up with these styles and images dominating popular TV, movies, and music.

To bring the nostalgia full circle, the chorus of “Debbie Downer” puts a twist on the cheer from the iconic 2000s cheerleading movie: Bring It On. Their version goes, “Brrr it’s cold in here/She sucks the life outta your atmosphere/ I said brrr It’s cold in here/All black everything, sad and weird.”

This catchy refrain invokes the perfect mix of sass and sardonic that even Eliza Dushku’s Missy Pantone would envy.

Overall, “Debbie Downer” is a perfect (if a bit too short) dance song for both today’s high schoolers and anyone looking to re-live their own teen angst. Let’s hope we see more team-ups from the duo of LØLØ and Maggie in the future!