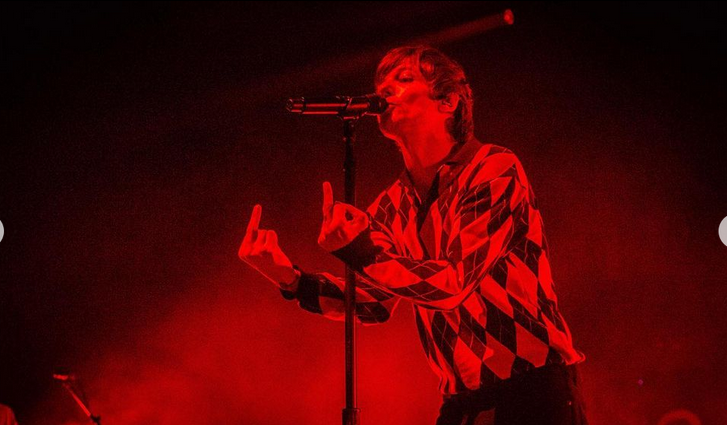 In January of 2020 Louis Tomlinson released his debut album, Walls. A pandemic hit but 24 months later, the former One Direction member toured the album. Turning what was a set of Oasis reminiscent songs into Tomlinson’s distinct personal style, the album had critical and cultural success. With a number 9 debut on the US Billboard 200 and charting worldly, this was just the beginning for Louis’ solo career. This, being his first solo project since the band took an indefinite hiatus in 2016, was no guarantee. Neither were the tons of sold out shows on the Walls World Tour.

But given Tomlinson was a former X Factor contestant, it’s no surprise that his live vocals are off the charts outstanding. A fact that is no secret to his fans, who wrapped around two full city blocks at his NYC show on February 12. During the show, the singer was not shy about acknowledging this fact.

Multiple times between songs, Tomlinson stopped to remark on the ‘codependency’ between him and his fans. Praising them as the most dedicated fanbase he’s ever seen and remarking that he was grateful to have them. Repeatedly claiming, “I need you, and you need me.”

Perhaps most notably, during his two song encore, he took the time to thank them again, only to be hit in the face with a chicken nugget. Well known amongst his fans as a cheeky Englishman, it was no surprise that it produced some of the best banter in the show.

🍗| "Who has hit me in the head with a fucking chicken nugget? You're taking the piss now, have it back!" – Louis before throwing a chicken nugget back at fans. 🤭#LTWTNYC

The only down side to his performance was the lack of original material – through no fault of his own. It naturally happens when such a big name tours off one album. His former bandmate, Harry Styles, had the same issue when he toured his first solo album in 2017. Out of the 12 songs on Walls, 11 were played. Perfect Now, being Louis’ neglected child in this instance.

He did, however, give the fans what they craved. Playing three One Direction classics; “Drag Me Down,” “Little Black Dress,” and “Through the Dark.” A setlist gesture wildly appreciated by his long time fans who grew up listening to the band.

He’s credited as a co-writer on both “Through the Dark” and “Little Black Dress.” A feat that makes perfect sense given the style of his solo music. It has the Tommo flare. Tomlinson himself once (jokingly) tweeted “And remember if it’s by one direction and it’s a banger I probably wrote it.”

All and all the show was excellent. Tomlinson crafted a fine setlist and brought a remarkable energy to the stage. Poised and self assured, but full of nonstop movement across his stage. And, proving Louis’ earlier statement right, he met his match in his attending fans.

During “Only For The Brave,” his fans lit up the venue with lights and gay pride flags reading the titled song. The most moving amongst the massive list of items waved around during the night. Including, but not limited to, a Louis doll, Louis’ head on an avocado, and posters galore.

If you’re tempted to catch a show, there’s still 70 shows left of tour. Though with Tomlinson’s seat filling powers, you’ll likely need to buy your ticket on resale. In the mean time you can pregame the show with a playlist of his set.