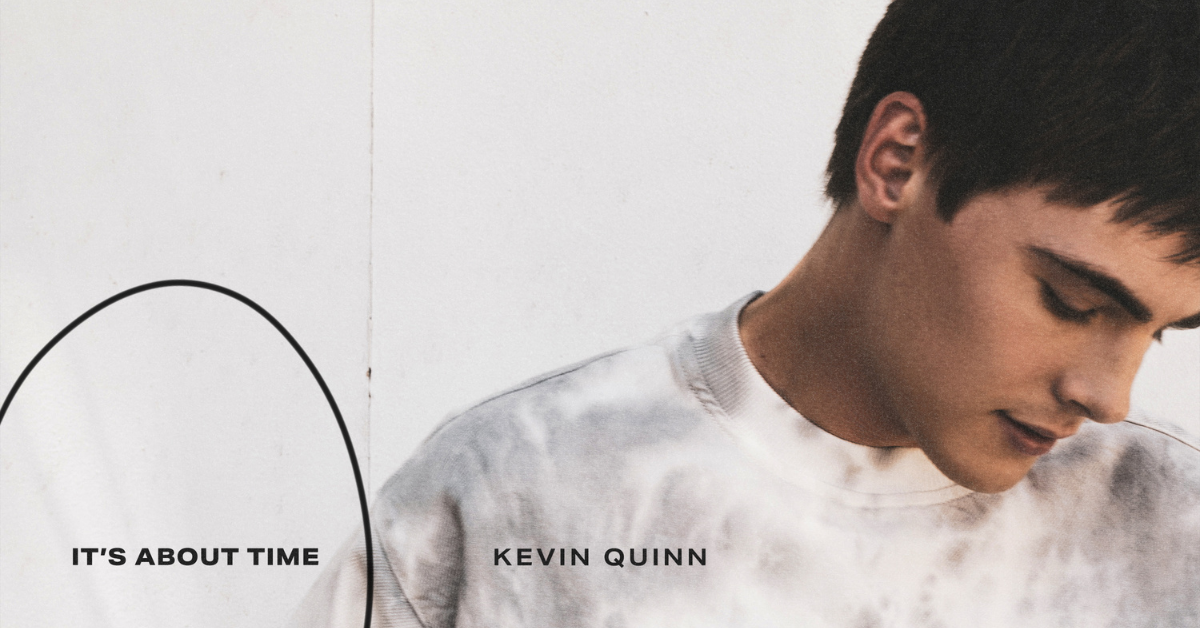 Kevin Quinn is known for being a Disney Channel star. His starring role as Xander in Bunk’d and his supporting role as Zac in Adventures in Babysitting have earned him an army of fans. Last year, Quinn starred in Netflix’s A Week Away, a musical drama, alongside Bailee Madison. With this ample experience in acting, and with an earnest passion for music, Kevin decided to pursue another dream of his. On January 14, the actor released his EP It’s About Time.

Back in August, the singer-songwriter released his first single, “Wildfire.” The powerful pop song focuses on keeping the faith even in the worst of times. In the music video, Quinn radiates enthusiasm as he dances around a room and passionately sings the track. Overall, It’s About Time offers a look into Kevin’s life and his journey as a Christian young adult. “I’m Still Breathing” and “Over and Over Again” showcase Quinn’s beliefs, and also offer hope to the listeners.

The title track, “It’s About Time,” is a catchy tune that leaves the audience with a positive message. Kevin urges the listener to treasure every moment of life, even if it seems insignificant at first. On January 21, Quinn released a The Breakfast Club-inspired music video for “It’s About Time.” Adding more encouragement to the already inspirational song, the musician states at the end of the video, “open your eyes. Don’t miss what might be right in front of you.”

One of the highlights of the EP is the track “Fuego en Mi Interior,” a Spanish version of “Wildfire.” Kevin’s decision to release this song is linked to his appreciation of Spanish-speaking fans. Soundigest talked to him about the tune as well as his new path as a musician and the role of Christian music in today’s society. Read the interview below and also watch the music video for “It’s About Time.” You can also stream the It’s About Time EP on Spotify and Apple Music. Happy listening!

The listeners’ reception to “Wildfire” has been incredible. What was your reaction to the song’s success?

I’m very grateful for that. To be honest, I went in with tempered expectations, so to see such a positive reaction was more than I could’ve expected. I still haven’t really put too much emphasis on the song’s success alone as a “win,” but rather that I was able to put out a quality song as a debut single and inspire the people that it was able to reach. That was the real immediate “success” of the song, at least in my mind.

For the past two years, we as a society have been struggling with loss and uncertainty. “It’s About Time” feels like a wake-up call to seize every moment. What made you choose this song as the title track?

Admittedly, “It’s About Time” is an interesting song to choose as a lead single, in that it takes a rather difficult subject like uncertainty or loss and turns it around into something anthemic and positive. That alone gives it an edge compared to other tracks, as it maintains the vulnerability I want to keep in the songs I write, while not losing its energy or positivity. There will be a time and a place for the more “intimate” and “vulnerable” type songs, but as an introduction and attempt to grab the listener and uplift them, this song was perfect. I hope they learn to love it as I have.

I read that you have written over 100 songs. How was the process of picking only five for the EP?

Surprisingly, not that difficult. Yes, I have written over 100 songs, but that’s only because I’ve been intentionally developing my songwriting skills over the past few years leading up to this point. I always want to out-write myself, but these songs felt like the best representation of where I’m currently at in my life and the 5 songs that I believed in most. In that way, it became clear which songs should be included in the project.

What impact do you think Christian music can have in an industry that leans towards secular music a lot more?

I understand why listeners may gravitate towards secular music more. My personal taste in music is not limited to one nor the other, but I do think that what we would call your typical “secular” music can be saturated with negativity. I don’t have a problem with that whatsoever, I simply wanted to avoid that type of music in my own artist project. It was just a creative choice that I decided to make, as I want my music to bring out the best in life, such as themes of love, acceptance, overcoming adversity, etc. If the industry can lead towards those types of songs, then I don’t see why it can’t lean towards the type of songs that I’m making as well. I just want the fans to feel joy in my music, because so often we may not, and music should be a positive experience for the listener; I feel I’m accomplishing that.

As a Costa Rican myself, I think it’s great when musicians connect with fans who don’t share their native language because it creates a sense of belonging, and it really feels like the artist cares about the fans. What motivated you to release “Fuego en Mi Interior”? Do you plan on releasing songs in even more languages?

I’d be happy to release songs in even more languages. I speak Spanish too and have learned to love the language. What drew me to recording “Fuego En Mi Interior” was really just a gesture of appreciation towards my fans in Spanish-speaking countries. There are so many fans of my projects from Latin America, and I just felt it would be a shame not to give them something they could enjoy as well. There was even talk about a Portuguese version of the song for the fans in Brazil. At the end of the day, they can consider it a “thank you” for all the outpouring of love and support they have given me from afar. I’m so thankful for them.

In “Over and Over Again,” you describe how God has helped you several times even when you didn’t feel like you deserved his help. Is there a piece of advice you can give to people who might be losing hope about things getting better?

Never, ever lose hope. I say that from experience, and from having been in that position myself. “Over and Over Again” is my personal favorite track on the EP because I feel it’s the most vulnerable song I’ve released to date, and it highlights some of the adversities I’ve had to overcome in life. Though through it all, this life is not perfect, and we are not perfect, nor are we expected to be. We’re going to make mistakes, and we’re going to have regrets. We’re also going to feel bad about ourselves a lot of the time — it’s just par for the course. My best advice is to take whatever bottled-up feelings you may be dealing with and turn to trusted friends, family, or God. I believe it to be our responsibility to love our neighbors in this life. To whoever is reading this, I hope you know that you are seen, you are heard, you are loved, and even though you may not think it, you are never alone. I hope this song speaks to you in whatever way you may need.

Many of your fans grew up watching you in shows and movies, and they’re still supporting you now as a musician. Are there any future projects you can hint at that they would be excited about?

It means a lot to me that they are still supporting me as I enter this new endeavor on the music side. Music is something I’ve always been very passionate about, and to even have people actively listening is enough for me. As of right now, though I’ve mainly been focused on my artist project and making more music, I do still plan to act in TV and film. Singing and acting are both so creatively fulfilling for me, and luckily with the way it’s going, I haven’t had to sacrifice one side of my career for the other, nor do I want to. I’m already thinking about the next album, and I do have a couple more films on the way for the fans.

What’s something you learned from acting that you think you can apply to your music career too?

You’d be surprised how similar the two are. I will say that every time I walk on stage, it feels like I’m walking on set in front of the cameras again, and vice versa. There’s just a certain element of performance or showmanship that goes into the two, and for me, they’re very mutualistic in how I approach them as arts.

Would you like to explore more genres in the future or will you stick to pop music?

I’m pretty much focused on the “now,” but I’d love to continue exploring my sound. The thing that’s so great about pop music is that there’s so much room for experimentation. The plan is to right now stick to pop, but if it gradually and organically starts taking shape into something else, then so be it. I’ve also been influenced by other genres, such as R&B or alternative, and I find that those sounds are starting to appear in the songs I’m writing more recently. To be honest, I’m not so much focused on labels and genres. I just want to make great music that is authentic to me.

Do you have some advice for people who want to become musicians?

Write, write, write. Keep writing, and never stop trying to out-write yourself. Make music that is representative of your true self, and never be afraid to go deeper.