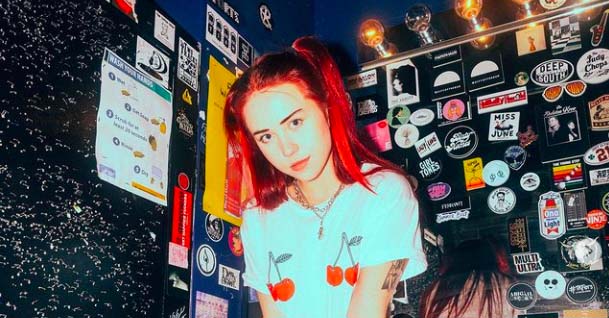 If you haven’t heard about poutyface yet, she’s an up and coming singer/songwriter from California whose sound is reminiscent of the late 90s/early 2000s. She gained popularity from posting videos to the songwriting app VOISEY which led to the release of her 2020 hit “DEATHWISH.” Her newest single “Cherry Picking” is an alt-pop angsty sounding track aimed at lovers who will chew you up just to spit you out.

Over distorted guitar riffs Poutyface tells the story of a turbulent relationship and the ups and downs that come with it on “Cherry Picking.” In the pre-chorus she sings, “You’re stupid and sloppy
And you think that would stop me // Get your dirty hands off me if you’re cherry pickin'” continuing into the chorus, “Get my name out of your mouth // Use me up then you spit me out // What’s that face? What you cryin’ about? // I’m drained, you’re lame, and I’m over it now.”

After the bridge the song erupts into a fiery explosion of an outro with the singers smooth vocals turning into screams. By the end of this track you know poutyface is fed up with those cherry pickers! If the pop-punk sound is your vibe, then this new track is definitely worth checking out. poutyface’s anthemic vocals will make you wanna scream the lyrics with her when you listen to “Cherry Picking.” Some lucky fans may have already been able to do this as the singer just might be singing the song on tour right now! poutyface is currently supporting YUNGBLUD on his Life On Mars tour across North America.

poutyface is definitely an emerging artist to keep an eye on this year, her unique sound will keep you wondering what she’s going to drop next. Be sure to check out her catchy new single “Cherry Picking” which just released today!